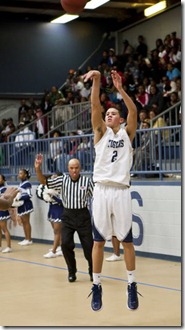 This was the backboard at the Purdue co-rec center after Mitch McGary stopped by for a recent run.(HT: Paint Crew)

Robinson wasn’t named to the McDonald’s All-American team and is an underdog for Mr. Basketball given the fact that he plays in Northwest Indiana and will be attending college out of state. That doesn’t mean that Robinson’s play has gone unnoticed. Here’s the Indy Star on Robinson’s Mr. Basketball chances:

By the numbers: Robinson is averaging just a shade under 22 points, 8.5 rebounds, 4.1 assists and 2.1 steals per game. He is shooting right at 50 percent from the field.

Pros: Lake Central (16-2) is ranked No. 7 in Class 4A and should have a chance to win a sectional for the first time in 15 years, though Munster and East Chicago Central will have something to say about that. Robinson has played well against top competition this year, scoring 30 points in an early season loss to Hamilton Southeastern and 33 in a 73-47 win over Menomonee Falls and its star player, North Carolina recruit J.P. Tokoto. If Lake Central can make it through to the regional, it has a legit chance to make it to the semistate, which would only bolster Robinson’s chances. South Bend Washington and Elkhart Memorial are possible roadblocks in the regional.

Cons: Name recognition isn’t an issue for the son of the former Purdue All-American, but he does play in the northwest corner of the state and last summer’s exhibition games against the Indiana All-Stars marked the first time much of the general public had seen him play. Lake Central’s sectional drought also hasn’t helped in that regard. Robinson has the numbers, but needs to lead his team deep into the tournament.

Robinson had 24 points and 16 rebounds in a 14 point win over Valparaiso and Lake Central clinched its first ever conference championship. Game highlights featuring Robinson (23 in white) and his teammate 2014 prospect Tyler Wideman (45 in white):

St. Mark’s beat Governors, 78-56, and Stauskas scored 23 points. They added another win against St. Sebastians by a final score of 88-38 and Stauskas had 15 points in that blowout.

Stauskas will play in the 3rd Annual Elite Showcase Basketball Classic on March 24th at the Verizon Center in Washington DC. The New England Recruiting Report recently ranked Stauskas as the No. 4 prospect in Massachusetts and the No. 11 prospect in the New England Region.

Rivals.com revamped their 2013 recruiting class rankings and Michigan is up to the No. 2 spot. Rivals ranks Zak Irvin 54th, Derrick Walton 87th and Mark Donnal 124th.

Irvin scored a game high 23 points in a win over No. 3 ranked Carmel including back-to-back threes in the fourth quarter. Here’s a video montage of the Hamilton Southeastern win by CMM Productions:

Walton scored 26 points for Chandler Park on Tuesday and will lead his team to Grand Rapids tonight against Ottawa Hills.

One of the prospects that Michigan continues to keep an eye on out east, Woodson discussed his game and his recruitment lately:

Okonoboh visited Syracuse for their game against UConn with his teammate Nerlens Noel. Okonobh recently mentioned Michigan as one of the primary schools involved in his recruitment and continues to be a potential option for the Wolverines.

Devin Booker is a new 2014 name to keep an eye on as the sophomore from Moss Point (Mississippi) is putting up big numbers and drawing significant interest. Booker is averaging 24 points, nine rebounds and three assists per game while connecting on 49% of his three point shots.

Georgetown, Michigan, Missouri, Mississippi State and Ole Miss are among the programs already showing significant interest. Michigan coaches have already been down to see Booker in action and he attended Michigan’s College Practice Camp in June.

Devin’s father Melvin Booker was a star at Missouri and Booker recently moved from Grandville, MI to Mississippi. His recent emergece is profiled in depth here.

“Devin’s a much better player than I was at the same age,” Melvin Booker said. “He’s very advanced as a player and he carries himself in a very mature way, both on and off the floor. But he just shoots the ball so well, especially with the size that he has.