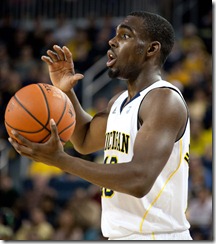 The NCAA tournament is less than a month away and suddenly the endless bracket projections and bubble scenarios are of the utmost importance to a number of teams. As for Michigan, the Wolverines got the 2-0 week they needed with wins at Nebraska and against Illinois and are in a great position secure a high seed on Selection Sunday.

Of the Wolverines’ five remaining games, only one comes against a ranked opponent, and that is Saturday’s primetime match-up at home against Ohio State. Three of Michigan’s final four games are on the road – at Northwestern, Illinois and Penn State – but those are also games that Michigan is capable of winning with a strong performance. Not to mention that knocking off the Buckeyes on Saturday would keep Michigan in the Big Ten Championship race. For now, most experts still have Michigan tabbed as a 4 or a 5 seed in their latest brackets. (Photo: Dustin Johnston)

After the jump find an in-depth look at Michigan’s resume, a roundup of what notable bracketologists are saying about the Wolverines, a look at the Big Ten’s NCAA tournament worthy teams and more.

We’ll also keep a close eye on the rest of the Big Ten and let you know who’s in, who should be in, who could be on the bubble and which games this week have the biggest tournament implications this week. If the season ended today, the Big Ten would likely put eight teams into the Big Dance

What about location? Early bracket projections have seen Michigan playing everywhere from Columbus to Nashville to Portland and everything in between. John Beilein’s team has been happy enough to hear their name on Selection Sunday when they were shipped off to Kansas City and Charlotte recently, but what does the potential of earning a higher seed mean for Michigan’s travel plans?

There are two things to worry about: pods and regions.

This year’s regional sites are: Atlanta, Boston, Phoenix and St. Louis. No more than two teams from any conference can be placed in an individual region of the bracket (unless the conference has nine bids) so you it’s a pretty safe bet that two Big Ten teams will be placed in each region. No region is particularly close to Ann Arbor but you can guess your one seeds. For example, Syracuse in the Boston, Kentucky in the Atlanta or Missouri in St. Louis.

Each regional is broken down into subgroups of four team pods (i.e. 1v16,8v9) which correspond with second/third rounds sites and don’t have to align with a regional. The important bracketing rule when selecting pods pertains to teams on the 1 through 5 seed lines: “To recognize the demonstrated quality of such teams, the committee shall not place teams seeded on the first five lines at a potential “home-crowd disadvantage” in the second round.” The Committee makes every effort to keep every team as close to their natural areas of interest as possible but those top five seed lines get priority.

How far are the first round sites from Ann Arbor? Here’s the relevant data from Crashing the Dance:

Other than Portland and Albuquerque, Michigan has several good options. However, Columbus would be a tremendous opportunity if the Wolverines play well down the stretch. Ohio State, the host institution, is ineligible to play in Columbus so that pod is up for grabs among the midwest’s elite teams.

Guessing where the Selection Committee will place teams is significantly harder than just predicting the field so these are little more than educated guesses, especially at this point. Still, Joe Lunardi’s bracket last Friday, with Michigan and Michigan State playing games in Columbus, caught my eye as one that would be particularly exciting. It’s a fun twist to have rival fans join in with underdogs like we saw with North Carolina and Duke fans in Charlotte last March.