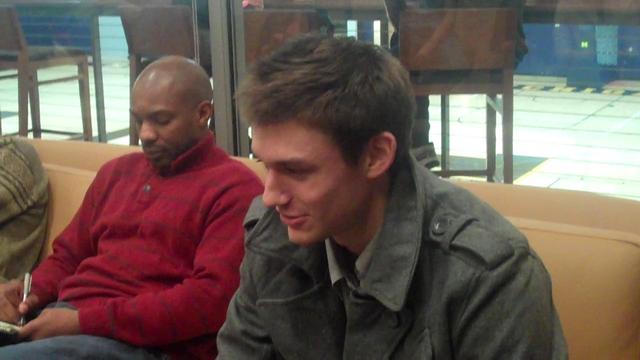 Stu Douglass met with the media this morning to reflect on his career up to this point and to talk about his impressions of the new Player Development Center. Here’s video of Douglass, followed by notes and quotes after the jump:


On the PDC and how it has affected him personally: “It just makes things easier on all of us. You can get shots up or shoot after a game if you didn’t like the way you played. It gives guys just another space to get better. The summer was terrible. We had about two hours in the Intramural building. Then to go basically to the extreme opposite and get in here and have more time than we ever needed really, it’s nice. It helps the team in ways we never even thought about.”

Douglass met Novak for the first time on the AAU circuit in the summer heading into both their senior years of high school, but the two never really talked to each other until a high school all star game following their senior seasons. “He was a funny kid. He had a bunch of stories for all of us. We all kind of knew each other a little bit, but I had never really talked to him before. His ice breakers were definitely funny stories.” Like what? “I can’t tell you that. I really can’t even begin to try to manipulate a story to try to tell you.”

Novak said the first thing he remembers about Douglass is that he was surprised to see him dunking during warmups. Douglass’s response? “I think people are still surprised when I dunk, so I’m used to that. That was when I first really started dunking and I think so any time I could dunk, I was dunking because I thought it was the coolest thing ever.”

On Douglass’s favorite part of the PDC: “The Smash Brothers thing (the team often plays Super Smash Brothers together in the players’ lounge) and just having that area to ourselves where the coaches aren’t just right next door, or they’re meeting in the locker room. We can kind of just be with ourselves a little bit. They’re close enough where we can go talk to them, but we have our own space. We didn’t have that before. You kind of had to watch what you listened to or what you said. Since I’ve been here, this team has been as close as any team I’ve ever been on at Michigan. The PDC just kind of brings us even closer together.”

On how his daily routine has changed since the opening of the PDC: “One thing now is recovery, especially playing so many minutes and with the end of the season. Having the cold tubs, the hot tubs, just different things have been huge for our recovery. The new weight room and having that space, we have our own space for our own workouts and recovery workouts. As the season winds down, those things kind of go unnoticed to outside people.”

On if he ever thought his career would turn out as it has: “I don’t know, I mean, I remember thinking I was going to go to Colorado, and then they pulled that and I was devastated. So after that, I just kind of didn’t have any expectations. Indiana, Purdue, Notre Dame pulled all their interest, and after that, I kind of just kind of lost any expectations that I had of my college dreams and career. Michigan called and offered and I took it, and those dreams kind of rekindled, but you don’t really have a whole lot of expectations. Things don’t really turn out the way you imagine them to be. Things aren’t always as peachy as you think they’re going to be. But for all of this to happen and the impact we’ve had on this program, that wasn’t the goal in mind coming in here. It’s been a nice surprise to be a part of this and kind of have my fingerprints on it.”

More on the recruiting process: “The last tournament in Vegas in early August was bad to say the least. Our team didn’t make it out of the first round of the tournament. So schools after that didn’t really have much interest in me or a lot of my teammates. It was just all around, nobody could hit a shot. We just looked bad as a team. Things weren’t flowing like they were before.”

On his career as a whole: “There’s a lot of things that I have accomplished from a standpoint of what I was thinking my college career would be like. I was thinking high school and stuff like that. I haven’t played the way I wanted to, but to have my fingerprints on something like that and so much talent coming through here in the last ten or plus years and not having three NCAA Tournament appearances, it says a lot. I think I’ll look back on it later and it will hit me a lot more emotionally. It’s something Zack and I are trying to be remembered by. Any way we can be remembered by will be a plus.”