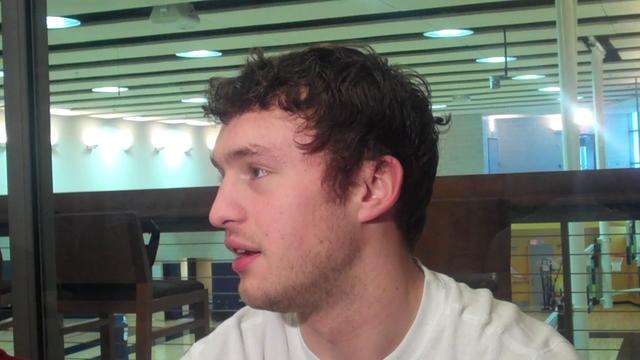 Demand was so high to speak with Michigan’s senior captains during Michigan’s off-week that the Athletic Department put together a sit down with both Zack Novak and Stu Douglass to reflect on their careers up to this point and share their thoughts on the renovations to the Crisler Center. Watch video from Novak’s sit down or find the highlights after the jump.


On whether there was anything else he wished for inside the Player Development Center:: “No. I don’t know what else I could possibly ask for. It’s more than I deserve that’s for sure. I’m happy with it.”

On whether he wished he was a freshman today to have four years in the PDC: “Maybe a sophomore. I don’t ever want to be a freshman again. I keep joking with the guys that Stu, Corey and I are just kind of renting this right now and it’s their thing and they are just letting us use it for a bit.”

On the PDC symbolizing ‘Michigan basketball being back’: “I think this was a big step for that. Especially for recruiting. Before you would bring a recruit in and take him through Crisler and you’ have the dusty yellow seats up top then you take him to the locker room and that wasn’t too kind on the eyes.We didn’t have a practice court. We practiced in Crisler every day. So going from that to taking them in here, it just makes the coaches job that much easier.”

On whether past recruits had negative reactions to Crisler: “No not really. They are all playing in high school gyms so anything is going to look good, or cool, to them. No it was more like you would have friends come to the game and they’d be like ‘what’s up? I thought this was going to be sweet’. Especially what they’ve done inside of Crisler so far just looks one hundred times better. The new scoreboard, and I think the new seats are the best part.”

On Novak’s recruiting visit: “I was so happy to be here I didn’t care. They could have put us in a shed and I was coming. Like I said, I was in high school and I didn’t know any better. I thought it was the greatest place ever.”

On past scheduling problems: “There were times when we would want to come and the girls would have open gym or someone would be practicing. Definitely there were conflicts. Now to be able to always have [access to the PDC] is really nice.I think it will really benefit the guys in the summer more than anything. For example this summer we were lifting at the wrestling place and then go to the IM to shoot but that’s not always open. It’s pretty big to be able to shoot after you lift. So now guys come in for a morning lift and it’s not a drive to go shoot. You walk down the stairs and you have ten baskets to do whatever you want.”

On whether he could have imagined it turning out like it has: “No. Probably not. I came in and I was just… I felt lucky to even be here. I came very close to not even playing college basketball at all. The fact that I went from starting day one of my senior year having no offers to ending up at Michigan. I thought that, deep down, if you would have asked me, I thought I’d be able to contribute and have a good career but probably not do some of the things that we’ve done and be a part of that. That’s probably not what I expected.”

On appreciation: “I think I’ve just never taken it for granted. Just realize that it’s a once in a lifetime opportunity and that my whole life growing up this is what I’ve wanted to do. I wanted to play in the Big Ten, wherever that was. I wasn’t a huge Michigan fan growing up but it’s safe to say I am now.”

On coming to Michigan to build a program versus his own career: “I’m going to say it was like 75-25. Freshmen come in and they want to play. I was no different than anybody else. I remember at the start of the season I sprained my ankle on the second day of practice pretty bad. That was a set back and then it took me a bit to get in the lineup, get some minutes. Coach Beilein sold us on the fact that we had a unique opportunity here. The program had been down and we need people to get it back. I don’t think anybody thought we’d necessarily be the group that would pave the way to that but we’re glad it worked out and luckily they have got some pretty good players to play with us.”

On when he thought U-M was headed the right direction: “Quick. Once I really got to know the coaching staff, coach Beilein, I’ve always kind of been a basketball junkie so I could tell right away how much he knew about the game. All of the sudden I’m playing and I’m getting more wide open than I had in years. I could just tell how much he knew. We had success early our freshman year, going to Madison Square Garden and beating UCLA, and that’s probably the game when we realized ‘alright we can actually be pretty good’

On the Michigan experience other than basketball: “That’s been unbelievable. Besides basketball, the people and the education here. I don’t know anywhere else that could have given me the best of both worlds as well as Michigan has.”

On time going by quickly: “It goes by really fast. It seems like I just got here. That sounds kind of cliché but… Freshman year seems a little bit away but it feels like I was a sophomore just a year ago. Now all of the sudden you realize senior night is in a week and a half.”

On the up-and-down sophomore season: “I think we still trusted it [Beilein and the system] and just stayed the course. Sometimes for whatever reason teams just go through a year like that. The ball doesn’t bounce your way a couple of times and I also have to take some of the heat on that. I was a captain of that team and I probably wasn’t ready to handle that fully. It’s tough and it looks like next year we’re going to have that sophomore captain, I think at least, and so the biggest thing I’ve been doing this year is grooming him and making sure he’s ready.”

How did sophomore year help you, and the program grow: “We talked about appreciation earlier. I think it just made me realize how delicate the whole situation is. Every game is so important, every possession is so important. A couple of possessions throughout a season can literally be the difference between sitting at home on March 15th or whatever it is and going to the NCAA tournament. You have to be ready to go every day and when you your number is called you have to be ready to produce.”

On whether part of his evolution was learning that other people don’t ‘care the way he does’: “No. I think that’s why we have been successful. We have a high level of caring on this team. Guys really do want to win, sometimes too much. That was definitely a fault of mine. There are some things you have to be able to let go and just say ‘forget it’ and move onto the next play. Just relax a little bit. I went through a horrendous slump in the middle of [my sophomore season] and struggled dealing with that. As I got older I learned to kind of let some things slide off.”