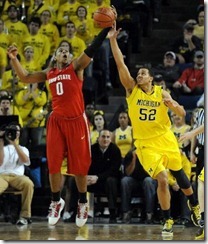 Michigan hasn’t played in many games with as much build up as Saturday night’s face off against Ohio State. The Wolverines haven’t played a game in a week and sit just one game out of first place and a win would provide a legitimate shot at the Big Ten regular season crown. Michigan is undefeated at home this season but John Beilein is just 2-9 against his rivals to the south since arriving in Ann Arbor. Michigan has come close to notching signature victories over the Buckeyes but Ohio State has always seemed to have that deciding blow whether it was a clutch offensive rebound, an Evan Turner buzzer beater or a smooth 18-foot jump shot from William Buford. The stage is set for the Wolverines to secure one of their biggest wins in recent memory but the task might be the 2011-12 Wolverines’ toughest yet.

The first time these two met, Michigan hung around for the first half before letting the Buckeyes pull away in the second. Michigan didn’t shoot the ball well, and had a few too many costly turnovers, but Ohio State wasn’t playing mistake free offensive basketball either. The game came down to two things: Ohio State dominated Michigan on the offensive glass, rebounding 42% of its misses for 16 second chance points, and attempted 14 more free throws than the Wolverines. Those two statistics were enough to allow Ohio State to cruise to the relatively easy home victory.

Ohio State By the Numbers

Ohio State might not be the invincible force that many expected when Jared Sullinger announced that he’d be returning to Columbus for his sophomore season. I certainly didn’t have the Buckeyes pegged for three Big Ten losses in their first 13 conference games. However, this is still one of the nation’s best teams despite a few blemishes in the loss column.

Michigan had its worst offensive performance of the season in Columbus, scoring just .83 points per possession, but that was against the best defense not only in the Big Ten but in the country. Ohio State forces more turnovers than any Big Ten team and cleans up the defensive glass as well as anyone, even after two subpar defensive rebounding performances against Michigan State and Minnesota. The Buckeyes settle for great rather than best in the other important defensive statistics, ranking third in the Big Ten in effective field goal percentage and free throw rate allowed.

Ohio State is no slouch on the offensive side of the ball either. Only Indiana scores more points per possession in league games and the Buckeyes are particularly effective scoring around the basket. Ohio State makes 51.5% of its twos (3rd B10) and rebounds 36.6% of its missed shots (2nd B10). The one soft spot in Ohio State’s offensive profile is perimeter shooting. The Buckeyes attempt just 27% of their shots from three point range (10th B10) and convert at an average 33.7% clip (7th B10). Jared Sullinger (9-of-14, 64%) is actually the Buckeyes best three point shooter in limited Big Ten attempts while Aaron Craft (6-of-15, 40%), William Buford (24-of-64, 37.5%) and Lenzelle Smith Jr. (12-of-32, 37.5%) are the three to worry about beyond the arc.

Aaron Craft vs. Trey Burke
Craft is arguably the best on-ball defender in the Big Ten and he gave Burke fits (5-of-11, 5 TOs) in the first meeting. Michigan needs Burke to excel and figure out a way to beat Ohio State with the pick-and-roll – and Mark Titus notes that the Buckeyes have struggled to defend ball screens of late.

Lenzelle Smith Jr. vs. Stu Douglass
Douglass has emerged as one of Michigan’s primary defenders and will likely spend time focusing attention on Buford and Craft as well. However, Michigan simply needs to get a body on Lenzelle Smith when Ohio State’s shots go up. Despite his strong defensive performance this season, Douglass still has missed his fair share of box outs this season. David Merritt examined some of the ways Smith killed Michigan in the first meeting but the Wolverines just can’t allow him to beat them again.

William Buford vs. Tim Hardaway Jr.
Two streaky shooters who seem to have limitless talent when they are playing well. This match-up could very well decide the game depending on which player gets hot. We all know about Hardaway’s recent struggles but Buford is just as likely to score 24 points on 17 shots as he is to score 11 points on 15 shots. If Buford has a big game, stopping Ohio State becomes exponentially more difficult.

Deshaun Thomas vs. Zack Novak
Thomas is a wired scorer and he has more individual talent than Novak but this match-up should allow Novak to end up with his fair share of open three point looks. Novak didn’t score in the last game and was essentially a non-factor. There’s no doubt that Michigan will need more production from its senior captain in his second to last career home gmae.

Jared Sullinger vs. Jordan Morgan
Michigan held Sullinger to 13 points on 11 shots in the first match-up this season and did a decent job limiting him last season as well. The double teams will come whenever he touches the ball in the post and Michigan needs to force him into turnovers. With Morgan the questions are familiar: does he make his first couple of bunnies around the basket and can he avoid silly fouls early?

Bench / X-Factors
Ohio State played four bench players who scored a combined three points in 29 minutes in the first match-up. U-M will be focused on Ohio State’s starters but should worry about Sam Thompson’s athleticism off the bench. Against Illinois, Evan Smotrycz proved just how much of a positive effect he can have on a game when he’s hitting shots. Smotrycz was 1-for-6 in 18 minutes in the first match-up and the Wolverines will need a stronger performance from him this time around. Similarly, Matt Vogrich has found his shooting stroke in recent games and he could change the game with a couple big shots off the bench.

Energy. A packed house, ESPN GameDay in the morning and a marquee primetime game. Michigan is going to be amped up on Saturday night and it will be important to reign that into positive energy early in the game. Tim Hardaway Jr. has mentioned avoiding getting “emotionally drunk” early in games and that will be important in this one. A few early makes could go a long way toward settling everyone down.

Defensive Rebounding. Statistically there probably is nothing more important to watch in the box score. Michigan’s inability to clean up the defensive glass was the difference in the first game and clean defensive rebounds can also provide a huge boost for Michigan’s offense in the secondary break.

Junk/Zone Defenses. John Beilein will have to throw different looks at Ohio State’s size and athleticism defensively. He’s likely been tinkering with these defenses for the last week and their success on five to ten possessions will be vital. There are going to be possessions where Michigan goes 2-3, 1-3-1, 2-3 trap, quickly doubles Sullinger from a different angle or anything else. Does Ohio State end up with an easy layup or does Michigan come up with a turnover?

Free throws and turnovers. Ohio State and Michigan are the best teams in the Big Ten at forcing turnovers but both are more than respectable at valuing the basketball. Both teams are also great at staying out of foul trouble on the defensive end. As the home team, Michigan needs to win both of these statistics for a realistic chance at the upset.

Ken Pomeroy likes Ohio State by a final score of 66-59 and gives Michigan just a 26% chance at the home upset.

It’s a Maize Out and FanCam will be returning. Everything you need to know about ESPN GameDay on Saturday morning as well as a Q&A with the secretary of the Maize Rage.

Video tour of the newly named William Davidson Practice Facility as well as a photo gallery.