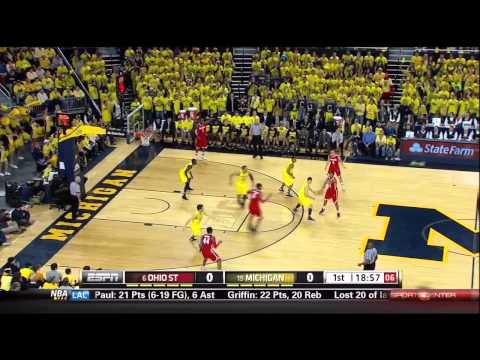 Before the ball was even tipped on Sunday, the scene in and around the Crisler Center told a story of its own. Fans lined up outside the stadium for hours and the arena was jammed to the rafters 10 minutes before tip off. Tim Hardaway Jr. said it was the best atmosphere he’s experienced in Crisler, and it was easily the best crowd of the John Beilein era – if not the best since the early to mid 1990s. Sparked by a well timed hype video featuring Tim Hardaway Jr. and Corey Person, the fans played a huge impact in the game from the very start.

Michigan got off to 6-0 lead to start the game and managed to calm any nerves early on. On Ohio State’s second possession of the game, the Wolverines’ stifling man-to-man defense forced Ohio State into a shot clock violation, bringing the crowd to its feet just over a minute into the game. Ohio State’s offensive woes continued for the first three minutes of the game, and they struggled to get any sort of flow. On the other side of the court, Trey Burke got Michigan going with a crafty spin move in the lane capped by a right-handed finish off the glass. On the Wolverines’ next possession, Hardaway hit a tough jumper, which was another great early sign for Michigan. Ohio State then turned it over on its next possession, and Zack Novak took it coast-to-coast to give Michigan the early 6-0 lead. Crisler was rocking, and Michigan was off to an ideal start.

2. Jordan Morgan’s back-to-back dunks get Michigan going in the second half

Jordan Morgan recorded his first-career double-double Saturday night (11 points and 11 rebounds) and played a huge role in slowing down Jared Sullinger, who was held below his season averages to 14 points and eight rebounds. Morgan had several key defensive and offensive plays, but no two plays held as much weight as these two plays early in the second half. Coming out of the halftime break with a five-point lead, Michigan knew Ohio State would start the half determined to make a quick run at Michigan’s lead. The Wolverines needed some sort of spark to get the crowd going again, and Morgan provided just that. Off an Ohio State miss and a rebound by Trey Burke, Morgan sprinted down in transition with three Buckeyes behind him. With Burke leading the break, Hardaway to his right and Morgan to his left, the two Buckeye defenders back in transition keyed up on Burke and Hardaway, leaving Morgan alone on the left side of the lane. Burke found him with a pretty one-handed bounce pass, and Morgan slammed it home with his left hand. Less than a minute later, Morgan and Burke connected on almost an identical play. After Evan Smotrycz corralled the defensive rebound, he quickly threw the outlet pass to Burke, who took off in transition again. With Hardaway on his left and Morgan on his right, Burke fired another one-handed bounce pass to Morgan, this time from half court. Morgan caught the pass in stride and slammed it home, once again bringing the crowd to its feet.

3. Michigan’s five charges help slow the Buckeyes in the paint

Take one look at the rosters of Michigan and Ohio State, and it’s pretty obvious that the Buckeyes should have the edge in the paint. Ohio State is longer and more athletic at almost every position.  The last time these two teams met, the Buckeyes outscored Michigan by 10 points in the paint.  On Saturday the Wolverines held their own and won the battle in the paint, outscoring Ohio State 26-24. Michigan didn’t get any taller since the matchup in Columbus, the Wolverines simply played smarter. Michigan took five charges and there was plenty of kudos to pass around as Jordan Morgan and Zack Novak both had two and Tim Hardaway Jr. had another. Each one was critical not only because it caused an Ohio State turnover, but also forced the Buckeyes to be more timid in the lane as they became more and more conscious of Michigan defenders waiting to take a charge. If the Wolverines were going to have any chance of stopping the Buckeyes in the paint, they were going to have to play poised and play smart, and that’s exactly what they did.

4. Stu Douglass and Zack Novak step up down the stretch

After Michigan held at least a four-point lead throughout the entire second half, Jared Sullinger’s free throws with 4:51 to go made it a one-possession ball game for the first time since the first half. Ohio State was within striking distance and Michigan needed somebody to step up. Michigan looked to its seniors, Zack Novak and Stu Douglass, and they stepped up.  Neither Douglass nor Novak had huge offensive nights — Douglass had seven points and Novak just six — but these two buckets were among the biggest in the game. With under four minutes to go and just a three-point lead, Douglass received the ball at the top of the key. Noticing that there was only five seconds left on the shot clock, Douglass took two dribbles right to create some space. He jab stepped in to get the defender on the back of his feet, then stepped back while knocking down a very difficult fadeaway over William Buford.

Ohio State answered on the other end and then it was Zack Novak’s turn to make a play. After a critical offensive rebound by Morgan to keep the possession alive, Burke reset the offense. With under two and a half minutes remaining, Novak received the ball at the top of the key, just as Douglass had a minute earlier. Novak took two dribbles to his strong side—the left—and jab stepped in to create some space. With Deshaun Thomas in his face, Novak fired up the fadeaway and nailed it. Michigan had a five-point lead once again, thanks to two very huge shots by its seniors.

5. Trey Burke’s clutch play down the stretch seals it

It seems that no stage is too big for Trey Burke. With 1:38 to go, the Wolverines had the ball and a three-point lead. Any other team with a freshman point guard might have gone in another direction, or been nervous with the ball in his hands. Not Michigan. With Aaron Craft, one of the best on-ball defenders in the country, guarding him, Burke remained poised. He dribbled around just inside the half court line for nearly 20 seconds, as Craft continued to apply strong defensive pressure. Then, with 1:20 to go, and the floor spread wide, Burke finally saw a lane on the left side and attacked. With Craft draped all over him, Burke made it look easy and finished strong at the hoop with a two-handed layup over Jared Sullinger’s help defense.

Then Burke got it done on the defensive end as well. Craft, no doubt feeling the need to get some retaliation on Burke, drove right down the lane with Burke on his tail. He made it to the rim and looked like he may have a good look at a layup, but Burke and Jordan Morgan collapsed around him preventing an easy look. The ball hit the bottom of the basket and caromed off Craft out of bounds. Michigan ball. Burke would miss the front end of a one-and-one and foul Craft on the other end of the floor but eventually found the ball in his hands again with Michigan up three points and 42 seconds to play. Burke drained the clock all the way down to 15 seconds until delivering the dagger. Off a screen from Novak, Burke drove hard down the right side of the lane. He slammed on the brakes just outside the block, noticing that Sullinger was in good position on help defense. He elevated over his childhood friend and shot the ball high off the glass. The shot banked in and gave Michigan a five point lead with just nine seconds to play, securing the victory and moving Michigan within a game of first place.