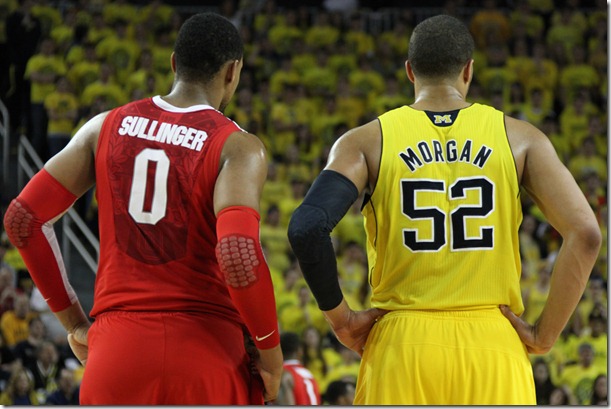 After day filled with hours of hoopla, television cameras and distractions, Michigan finally took the court in front its best home crowd in over a decade. The stage was set to make a statement. All that remained was a performance on the floor to back it up. Two hours later the statement was crystal clear: Michigan is a Big Ten title contender.

The Wolverines led wire-to-wire, controlling the game but never dominating, while answering every run that the No. 6 Ohio State Buckeyes threw in their direction. For the 15th time in 15 tries this season, Michigan simply made more winning plays than its opposition down the stretch at the Crisler Center.

Beyond all of the statistics, this game boiled down to four late Michigan possessions. Ohio State cut the Michigan lead to just three points on four different occasions in the final four minutes. Every time, the Wolverines had an answer. First it was Stu Douglass that played hero. Michigan’s “shooter” caught the ball 26 feet from the basket with five seconds on the shot clock, put the ball on the floor and hit an 18-foot step back jumper over William Buford. Then Zack Novak got involved with a step back jumper of his own, this one over Deshaun Thomas.

Both shots define what this team has become. A team that’s rarely bigger, stronger, more athletic or talented than its opposition but simply finds a way to win. A pair of seniors that nearly graduated high school without major scholarship offers stepped up and knocked down step-back jumpers over former McDonald’s All-Americans. Both shots had a degree of difficulty so steep that neither player would have dreamed of attempting them as freshmen.

In the final 90 seconds, the ball would be in the hands of another overlooked Wolverine. It was no secret that Michigan was going to win or lose at the hands of its freshman floor general and Trey Burke was up for the task. Twice he delicately weaved his way past Aaron Craft, the conference’s best on-ball defender, before finishing with gravity defying floaters over his former high school teammate, and All-American, Jared Sullinger.

The Columbus native that Ohio State coaches didn’t feel was good enough to justify a scholarship offer had emerged as the hero, again. It was only fitting to see him best the player that likely prevented him from ending up at his dream school as well as the player he’d played alongside for the majority of his life. The 5-foot-11 guard’s freshman success continues to be more a product of his mental fortitude, poise and sheer determination to win more than anything else.

Michigan still struggled on the offensive glass, allowing Ohio State to rebound 36% of its missed shots and convert 12 second chance points. However, the Wolverines forced significantly more turnovers that they did in Columbus – thanks in part to five drawn offensive fouls – and converted on the extra opportunities. The Wolverines scored 17 points off of turnovers and outscored Ohio State 8-0 in fast break points.

Despite a few run outs and easy baskets off of turnovers, Michigan’s offense still struggled to muster points against a great Ohio State defense. The Wolverines scored just .98 points per trip and this was the first time since 2008 that Michigan won a Big Ten game while failing to surpass 1 point per possession. Making just 3-of-13 threes, this was Michigan’s worst three point shooting performance of the season but the Wolverines made 19-of-34 (56%) of their twos and outscored Ohio State by two points in the paint.

As has been the case at home all season, it was Michigan’s defense that carried it to the win. The Wolverines held Ohio State to just .89 points per possession, the Buckeyes second worst offensive performance of the season. Deshaun Thomas had a career night, scoring 25 points on 13 shots, and Jared Sullinger was effective in bursts. However, the other seven Ohio State players that saw the floor were a combined 5-of-22 from the field.

Evan Smotrycz scored the only two bench points of the game; for either team. It’s no secret that Ohio State and Michigan both favor short benches but it’s eye opening to consider that two of the four Buckeyes that came off of the bench were former McDonald’s All-Americans while Michigan utilized Smotrycz, Matt Vogrich, Blake McLimans and Colton Christian.

Michigan is a legitimate Big Ten title contender and suddenly it looks possible for Michigan to win out. The Wolverines play three of their final four games on the road but Ken Pomeroy favors the Wolverines in all four contests. Illinois has lost eight of its last nine games and is in free fall after imploding against Nebraska. Purdue just kicked Kelsey Barlow off of the roster and Penn State shares the bottom spot in the standings with Nebraska. A Tuesday evening trip to Evanston looks to be the most daunting challenge but is far from insurmountable. Sitting a game behind Michigan State – who still has to travel to Indiana and host Ohio State – the Wolverines don’t control their own destiny, yet, but could certainly make things interesting down the stretch.