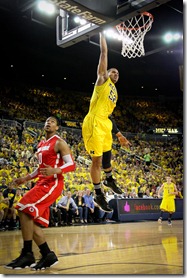 Over the past several seasons John Beilein has consistently referenced Michigan’s transition from being the hunters to the hunted. From a macro perspective, Michigan is still hunting the top while attempting to chase down Michigan State in the final two weeks of the season. However, examine each of Michigan’s final four games individually and the Wolverines are the hunted. Michigan will be playing teams that reside somewhere in the mid-to-bottom half of the league and are hungry for a marquee win. In fact, no team in the Big Ten will be hungrier for an NCAA tournament boosting statement win than the Northwestern Wildcats tonight.

Michigan survived Northwestern in overtime at the Crisler Center in a game that Michigan uncharacteristically won with its offensive rebounding. The Wolverines made just 7-of-30 threes and weren’t much more effective around the hoop (15-of-36 on twos) but managed to grab a season high 17 offensive rebounds. The Wolverine defense struggled to guard Northwestern’s offense for long stretches in the first match-up but eventually buckled down, allowing just four points in the final eight minutes of regulation before prevailing in overtime.

Michigan is 6-4 since the first match-up while Northwestern is 5-5. The Wildcats notched a statement win over Michigan State but haven’t notched any other significant upsets, and dropped a game at home to Purdue. Northwestern is a serious NCAA bubble team and could potentially cement a bid with a 3-1 finish against Michigan, at Penn State, vs. Ohio State and at Iowa.

Northwestern is still the same team stylistically. The Wildcats are the best shooting team in the Big Ten, making 50.8% of their twos (5th) and 39.5% of their threes (2nd) for a 54.4% effective field goal percentage.  They don’t turn the ball over often and have shown a new found ability to get to the free throw line. Defensively, everything falls apart. Northwestern surrenders 1.11 points per possession, second worst in the conference, with the 10th best effective field goal percentage defense and worst defensive rebounding in the league.

Northwestern’s “small” lineup was very effective offensively in the first meeting. John Shurna started at the five spot and gave Michigan fits defensively and there’s no reason to expect any other lineup from the Wildcats, especially with Luka Mirkovic sidelined. Shurna is a nearly impossible match-up for Jordan Morgan defensively and Evan Smotrycz isn’t the most disciplined defender, especially off the ball.

Michigan needs to take advantage of Northwestern’s small lineup on the offensive side but also needs to do everything within its power to prevent Shurna from finding open threes.

The strategy of forgoing offensive rebounds to get back on transition is acceptable against teams like Ohio State, Michigan State or Indiana but Michigan has to attack the glass against Northwestern. The Wildcats are the worst rebounding team on both ends, grabbing just 24.6% of their misses and allowing opponents to grab 36.3% of theirs. Michigan outdid Northwestern’s conference average in both of those statistics when these teams met first with five Wolverines grabbing two or more offensive boards. (Photo: Dustin Johnston)

Michigan forced the Wildcats to turn the ball over on an uncharacteristically high 25% of their possessions in the first meeting which led to 18 Wolverine points. Michigan’s offense has been extremely effective in limited fast break and secondary break situations this season and those easy buckets have been critical.

The Catch-22 is that Northwestern’s offense is designed to punish teams that are over aggressive. Jump a passing lane, backdoor layup. Watch the ball, backdoor layup. Lose focus, open three pointer. Michigan has been a good defensive team this year but the last time the Wolverines traveled to Evanston they were firebombed by the Wildcat offense to the tune of 1.25 points per possession.

Two weeks. Four games. This is the home stretch and the end is in sight. There are other opportunities on the horizon with the Big Ten and NCAA tournaments but Michigan has played its first 27 games to get to this point. The Wolverines are playing for a Big Ten championship. The traditional “let down game” stereotypes apply as the Wolverines head on the road against a good team playing for an NCAA tournament berth on short rest after a huge home victory. Pomeroy likes Michigan, barely, predicting a final score of 66-65 with a 52% chance of a Wolverine win.