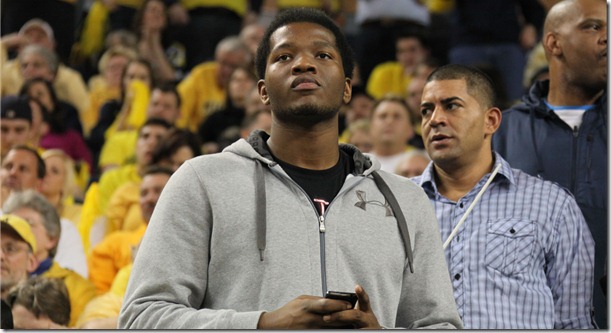 Rivals highlighted their top ten candidates to move up in their final 2012 rankings and Glenn Robinson III came in first on the list:

The 6-foot-7 wing was knocking on the door of five-star status coming out of the summer. This winter, he appears to be well on his way to busting that door down. He has size, a complete game and high level athleticism that all translates at a high level. His impact at Michigan should be immediate and sizable.

Robinson had a game-high 18 points in 59-50 win over Michigan City which gave Lake Central an unblemished home record on the season.

McGary had 13 points ina  76-42 win over New Hampton and we posted video and scouting notes yesterday. On Monday, Brester faced off with a loaded Tilton squad and prevailed once again, by a final score of 60-56, to remain undefeated on the season. McGary had 12 points in the Brewster win.

We were the first to discuss Della Valle as a potential 2012 recruit last week and want to continue to emphasize that this is a precautionary move, going after a player this good this late in the game is always a nice luxury to have. Michigan hasn’t offered and it only makes sense to conduct due diligence and doesn’t mean attrition is necessarily imminent.

Della Valle had 18 of his game high 23 poitns in the second half to lead Findlay to a 19 point win over Stoneridge Prep at the Henderson Invitational.

Zak Irvin scored 37 points on 7 of 10 three point shooting in a big 107-98 win over Pike High School. Irvin also had 28 points, six rebounds, three assists and three steals in a win over Westfield which wrapped up a third consecutive Hoosier Crossroad Conference championship for Hamilton Southeastern.

Hatch hasn’t played basketball this season but continues along the road to recovery.

Kyle Bogenschutz talked with Mark Donnal on Friday night and tweeted an update on Hatch, who’s been to a handful of Michigan games this season:

Walton had a game high 29 points in a 64-53 loss to Ottawa Hills and knocked down four triples. Chandler Park took the loss but Walton enjoyed the trip across the state:

“It was fun,” Walton said. “I’m sad that we didn’t get the win, but it’s always fun to see guys that you play with during the summer.”

Mark Donnal had 13 points in a 52-44 loss to Perrysburg on Friday, he was also in attendance for Michigan’s win over Ohio State along with fellwo commitments Zak Irvin and Derrick Walton.