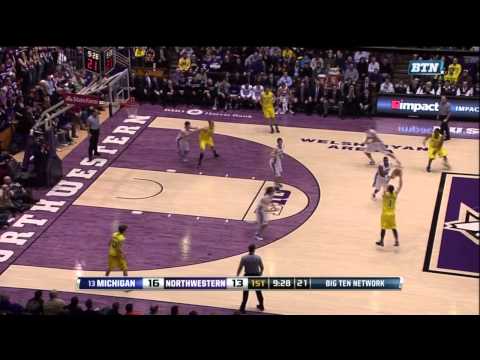 With Northwestern playing a 1-3-1 zone for a good portion of the game and with both Jordan Morgan and Evan Smotrycz in foul trouble in the first half, Michigan was going to have to hit some threes to stay in it on Tuesday. The inside presence just wasn’t there for the Wolverines, and the Wildcats weren’t going to let Michigan beat them from the inside. With the corner three open all game, it was the perfect opportunity for Matt Vogrich to step up. He did, and he played a huge role in the win. After Northwestern went on a quick 5-0 run midway through the half to cut the Michigan lead to one, Vogrich hit back-to-back threes to keep Michigan ahead. On both shots, the Wolverines attacked the zone to open up the perimeter, which is exactly what you want to do to beat the 1-3-1. Vogrich first hit a three in the right corner off a dish from Burke, then from the left off a drive and dish from Douglass. For a brief while, Vogrich, a Chicago native, made everyone forget that Michigan’s big men were sitting on the bench and the Wolverines seemed alright without them. However, that wouldn’t last long.

2. Northwestern exploits Michigan’s lack of an inside presence with Morgan and Smotrycz in foul trouble

John Beilein’s two fouls and sit policy was tested to the max during the first half on Tuesday. He didn’t flinch. With 15:39 to go, Evan Smotrycz picked up his second and was immediately sent to the bench. Just over a minute after, Jordan Morgan picked up his second. On cue, he made the trip to the bench as well. With over 14 minutes to go in the first, Michigan’s primary big men were cemented to the bench. Northwestern took advantage immediately. Reggie Hearn began the dominance in the paint with a nice one-on-one move against Zack Novak and then a layup in the face of Blake McLimans, who replaced Smotrycz and Morgan. Not long after, Drew Crawford drove in the lane right at McLimans, and scored through McLimans. It didn’t stop there as Northwestern dominated inside and on the offensive glass. Hearn finished an easy one once again, and with 25 seconds to go in the half, John Shurna hit a bunny with the much smaller Trey Burke guarding him. Northwestern went into the break on an 18-5 run and with a 31-24 advantage.

In the second half, Michigan came out looking like a team fighting for a Big Ten title. The Wolverines looked aggressive and with Morgan back in the game, they could finally look inside to combat the Northwestern defense. Midway through the half, the Wolverines had cut the lead to two on three separate occasions but couldn’t quite get over the hump. That changed after a helter-skelter possession with just under 10 minutes to go. After Stu Douglass missed a three from way downtown, Smotrycz came up with the offensive rebound to keep the possession alive. Douglass drove and kicked it out to Novak, who also missed a three. But once again, Michigan came up with the board. After a scramble for the ball, Vogrich dished it to Douglass, who was wide open for three. This time, he didn’t miss. Michigan cut the lead to one and Douglass made another great play on the next offensive possession. He found Vogrich in the corner, and he hit a three to give the Wolverines their first lead of the game since the 7:41 mark of the first half. Twenty seconds later, Novak came up with a steal and took off on a fast break. He found Burke on the two-on-one break, and just like that, Michigan turned a four-point deficit into a three-point lead.

With 2:42 to go in the game, Northwestern held a four point lead and the Wolverines were on the ropes. Dave Revsine and Shon Morris knew exactly who was going to shoot the ball: Trey Burke. The freshman point guard fired up a three and buried it to pull Michigan within one. The freshman continues to hit huge shots when the Wolverines need it most. Following a ridiculous John Shurna bucket, Michigan still was down three with under two minutes to go. Once again, the Wolverines remained calm and stayed the course. After an up-and-down night and horrendous free throw shooting, Tim Hardaway Jr. hit his most important bucket of the game, a three from the corner to tie the game up at 49. With just over 90 seconds to play, the game was up for grabs.

5. Neither team can convert in the closing minute of regulation

After a back and forth battle all game, it was appropriate that both teams would have a chance to win it in the final minute. With a minute to play, John Shurna, the Big Ten’s leading scorer and the all-time leading scorer in Northwestern history, had a good look at a baseline jumper over Hardaway but his shot too strong. Reggie Hearn grabbed the offensive rebound, and the Wildcats had new life. But they came up empty on their second attempt as well, a deep three from JerShon Cobb. Off the miss, Burke came up with one of his six defensive rebounds and made the heads up play to call timeout before falling out of bounds. With 25 seconds to go and the score tied, the stage was set for somebody to be the hero for Michigan. Northwestern had a foul to give and used it with four seconds to go. The Wolverines called timeout to set up a play but they didn’t execute. Burke received the ball at the top of the key and Novak set a screen. The Wildcats immediately double-teamed Burke, leaving Novak wide open. But Burke never saw him and instead was forced to throw up a prayer as time expired. The shot was well off, and this game was headed to overtime.

In regulation time, Michigan shot a season-high 33 three-pointers and made 11 of them for 33% long range shooting. Not horrible numbers, but certainly not great. It was a different story in overtime, and it started with another wild possession. Off a miss in the corner from Hardaway, Novak chased after the offensive board. As he was falling out of bounds, he fired the ball toward a couple of Northwestern players. The ball bounced around for a couple seconds before Douglass managed to tip the ball back in the hands of Novak. Novak drove, then found Burke – who had missed a three on the possession before – wide open for three at the top of the key. Burke capitalized on Northwestern’s scattered defense and suddenly the Wolverines were confident and had the lead. On the next possession, Burke found Novak in the corner for three. He hit it – his first made shot of the game – to give Michigan its largest lead of the game: six points. Less than a minute later, Douglass provided the dagger with an NBA range three that extended the lead to nine points. The back-to-back-to-back threes buried the Wildcats and kept Michigan’s title hopes alive.