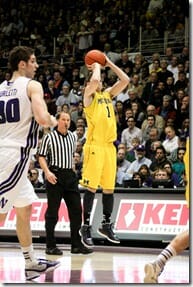 There are more than enough college basketball teams that can rack up wins when they play their best. Great college teams figure out ways to win games when they play poorly and that’s exactly what Michigan did last night in Evanston. The Wolverines shot themselves in the foot with early foul trouble, missed free throws and layups and attempted a seemingly endless number of three pointers. Somehow, when all was said and done Michigan had escaped with a victory.

Northwestern appeared to have finally seized the game with a four point lead and under three minutes to play as Michigan’s comedy of errors appeared to have finally proven too much to overcome. But there was just enough time for a last ditch Wolverine effort. Backs against the wall yet again, Michigan responded. The Wolverines would hit five of their final eight three point attempts to send the game into overtime and win comfortably in the extra period.

John Beilein mentioned in his post game that Northwestern was just a couple of bounces away from being a shoe-in for the NCAA tournament – notably in both overtime games against Michigan. He meant it as a compliment. In actuality those couple bounces and extra possessions are the reason why Michigan is 11-4 and Northwestern is 6-9. Whether it’s senior leadership, mental fortitude or moxie, this Michigan team has thrived in late game situations. Six of Michigan’s 11 Big Ten wins have come in overtime or been decided by five points or less.

The four factors chart doesn’t tell the whole story. In fact it’s hard to explain how the numbers add up. There aren’t many teams that get out-rebounded by Northwestern in Evanston and end up celebrating in the locker room after the game. The only way to look at the game is by breaking it into segments.

Northwestern scored three points on its first six possessions of the game – it also took just six possessions for Jordan Morgan and Evan Smotrycz to accumulate two fouls each. With Blake McLimans and Colton Christian manning the five position, the Wildcats would rattle off 28 points in the next 25 possessions.

Michigan’s defensive effort for the 31 minutes that McLimans and Christian weren’t on the floor was phenomenal. Michigan outscored Northwestern 53-27 in the 40 possessions that Morgan or Smotrycz were on the floor, that’s 1.3 points scored per trip to just .68 allowed. The Wolverine defense looked like a well oiled machine as it switched every screen and held Northwestern to just 3-of-16 three point shooting. With Morgan or Smotrycz in the game, Michigan was more than adequate on the defensive glass as well. Despite the rollercoaster first half defensive performance, Michigan was the first team to hold the Wildcats to under a point per possession for an entire game in the last month.

Those other 14 minutes happened, and they almost cost Michigan the game. Morgan and Smotrycz were both called for just one additional foul in the second half and overtime and neither were limited due to fouls. Of course their effective play in the second half without worrying about fouls can also be an endorsement of the strategy. Both players pick up cheap fouls and I tend to be ok with the two-and-sit strategy but with three minutes remaining in the first half, down five with McLimans understandably gassed, you simply have to go back to Jordan Morgan or Evan Smotrycz. Smotrycz might be the smarter move, to protect your actual starter, but Colton Christian at the five position is just not the answer in that scenario.

The Michigan offense was rescued by hitting five of its last eight three point shots. The number of three point attempts 18 twos to 38 threes was as appalling as the fact that the Wolverines only converted 39% of their two point looks against Northwestern’s porous interior defense. The 1-3-1 zone certainly slowed Michigan’s offense, daring the Wolverines too shoot threes, but it wasn’t successful in forcing turnovers. Firing up 68% of your shots from three point becomes a more viable strategy if you can crash the offensive glass (Michigan did in the second half) and eliminate turnovers (12.1% turnover rate). Both paid off as Michigan attempted five more shots and four more free throws for the game.

The Wolverines are a legitimate Big Ten title contender. Michigan has to play Purdue on Saturday before traveling to Illinois and Penn State. Two of the games are on the road but the Wolverines are 3-0 against that group this season. In mid-January there were some questions about where this team was heading but right now the Wolverines have a realistic shot to finish 14-4 in Big Ten play.