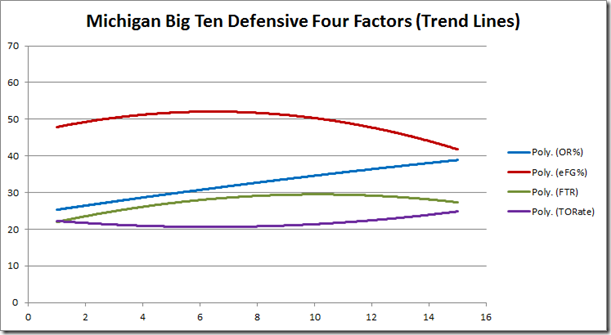 KJ put together a collection of slick charts at The Only Colors by plotting conference-only efficiency numbers by game and applying polynomial trendlines (order of 2, meaning they can only bend once). It’s worth checking out all of the charts to see how the other contenders have played throughout the season but here’s Michigan’s graph (offense is blue, defense is red, so you want a higher blue line and a lower red line):

Naturally many of these trends are a product of who and where Michigan was playing (KJ also included Arkansas) and the fact that Michigan went .500 from Jan 14th to Feb. 8th leads to some negative trends in the middle of the season. The charts are still interesting to observe how the Wolverines have progressed this season and help pinpoint why they struggled against the more difficult portion of the schedule. Michigan’s defense stands out as the primary culprit. The Wolverines surrendered over a point per possession in five consecutive games while the offense has isolated struggles but remained pretty consistent.  The good news is that the defensive intensity which Michigan demonstrated early in league play appears to be returning down the stretch. To take a closer look at Michigan’s progression throughout the season, I broke out the four factors numbers and plotted them with trendlines throughout conference play.

This chart shows the trendline for each of Michigan’s four factors offensively in Big Ten play. You want rebounding (blue), shooting (red), free throw rate (green) to be high and turnover rate (purple) to be low. For context when looking at these charts, here are the Big Ten averages this season:

The major takeaway here is that Michigan’s shooting has improved steadily over the course of the conference play. Shooting is the most significant of the four factors offensively so that’s a great sign for Michigan’s chances going forward. Other than trips to East Lansing and Columbus, the Wolverines have shot the ball very well over the last month, and that’s in spite of Tim Hardaway Jr.’s prolonged shooting struggles.

Offensive rebounding and getting to the free throw line simply aren’t staples of John Beilein’s system and have trended downward throughout league play before a slight uptick late in the season. The Wolverines have ranked near the bottom of the Big Ten consistently in both categories and there’s not much reason to expect that to change. Likewise, this team values the basketball as well as any and the turnover numbers have progressed from good to great over the course of the season.

The defensive chart is a bit more interesting and shows an alarming trend on the defensive glass. Michigan was doing a pretty good job of cleaning up opposition misses early in conference play, rebounding at least 70% of opponents’ missed shots in the first five league games, but has surpassed that mark just three times in the last ten Big Ten games. Lackluster offensive rebounding is a partially strategic decision but getting beat on the defensive glass is a fundamental flaw.

Some of this shift is due to Michigan playing almost entirely small ball. Stu Douglass has played 35 minutes or more in Michigan’s last five games which means Zack Novak is manning the four position for at least 30 minutes per game. It’s tough to judge Douglass in the backcourt as anything other than a positive given his perimeter defense and his increase in minutes also coincides with one of the strongest positives to take away from the chart: defensive effective field goal percentage. However, there’s no doubt that the Wolverines are a significantly worse defensive rebounding team with a lineup of Burke (5-11), Douglass (6-3), Hardaway (6-5), Novak (6-4) and Morgan (6-8) than with a lineup that features Evan Smotrycz.

How do you make up for playing small ball? Force turnovers and don’t foul. Michigan has done a great job in both departments all season and continues to improve. Ken Pomeroy calculates correlation numbers for each of the four factors in an effort to determine which statistics are most important to a team’s offensive or defensive success. What’s most important for the Wolverines? Here’s a look at the numbers:

Higher numbers (in an absolute sense) have the greatest correlation to defensive efficiency. The relationship with shooting is to be expected but the next most important elements are free throw rate, turnover rate and then defensive rebounding. Michigan is the best in the Big Ten at keeping opponents off the free throw line and forcing turnovers, so it’s safe to assume that John Beilein is prioritizing the proper things defensively.

At the end of the day, Michigan appears to be rounding into form at the proper time and the Wolverines are playing some of their best basketball down the stretch. How much of that is a product of the schedule more so than team-wide improvement remains to be seen, but the numbers are encouraging. The most likely Achilles’ heel in any late season loss also appears to be clear if it wasn’t obvious before hand: defensive rebounding.