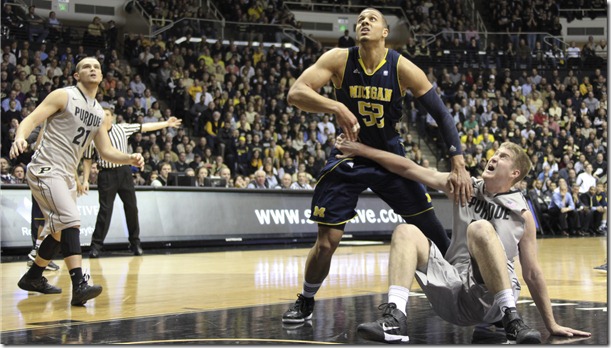 With 258 games and 185 starts between them, Zack Novak and Stu Douglass will take the Crisler Center floor for the final time on Saturday night. The duo committed to Michigan with little fanfare and, bit by bit, have reestablished the program. Neither player ever averaged double digits or posted glamorous numbers but Zack Novak broke the 1,000 point plateau and Stu Douglass is likely to graduate as Michigan’s all-time leader in games played. Most importantly when all is said and done they will have taken the program, which hadn’t been to the NCAA tournament in a decade, to the Big Dance in three of their four seasons. Both players would tell you that the memories can wait as Michigan hosts Purdue with a chance to remain perfect at home and within striking distance of a Big Ten championship.

Michigan’s win at Purdue came a month ago today and was its first road win of the season. The Wolverines got off to a strong start, carrying a lead through the majority of the game before allowing Purdue back in late. Purdue rattled off a 17-3 run to take the lead before the Wolverines pulled a Houdini act, tightening up their defense down the stretch and escaping with the narrow victory. Michigan out-shot and out-rebounded the Boilermakers but, in an uncharacteristic occurrence for the Wolverines, Purdue won the turnover battle.

Since the First Meeting…

Purdue is 4-2 since losing to Michigan and now sits at 8-7 in Big Ten games. Looking like a probable NCAA tournament team, Matt Painter’s team appears to have the sixth best tournament resume in the Big Ten. The Boilermakers have won three of four games and Robbie Hummel likes how Purdue is coming together, “it’s a thing where you don’t want to peak too early, but we’re peaking at the right time.” Kelsey Barlow was kicked off of the team after a recent bar incident, but the Boilers have surpassed 1.3 points per possession in three of their last five games.

Despite ranking near the bottom half of the Big Ten in shooting, offensive rebounding and free throw rate, Purdue has the Big Ten’s fourth best offense. The Boilermakers are as turnover averse as it gets in the Big Ten which means when their shots are falling, they are deadly. The shooting has been all or nothing. Purdue has failed to surpass an effective field goal percentage of 45% in six Big Ten games but topped 65% on three separate occasions.

A year after touting the Big Ten’s best defense, Matt Painter has one of the league’s worse. Purdue is allowing 1.10 points per possession in Big Ten game and has held opponents under 1 point per trip in just three of 15 league games this season. Purdue ranks 11th in shooting defense, 9th in turnovers, 8th in defensive rebounding and 9th in free throw rate allowed.

Robbie Hummel at the five

Similar to the Northwestern look with John Shurna at the five, Purdue has gone to a small-ball lineup with Robbie Hummel playing center this season. Hummel is the best defensive rebounder on the Purdue roster, so the move doesn’t necessarily hurt in that regard and he’s infinitely more skilled offensively than Purdue’s other options. Michigan did a great job against John Shurna on Tuesday, which should help prepare for a mobile player at the five, but guarding Hummel is a challenge that will require great discipline for both Jordan Morgan and Evan Smotrycz.

Lewis Jackson on the pick-and-roll

When Michigan struggled defensively in the first game, allowing a 17-3 second half Purdue run, it was because the Wolverines couldn’t keep Lewis Jackson out of the lane. The screen-and-roll with Hummel at the five was particularly difficult to defend because Hummel will shoot threes (even though he’s making less than 30% in Big Ten games) but can also put the ball on the floor and drive past Michigan’s five men on the perimeter. Jackson is one of the few guards in this league that is quicker with the ball in his hands than Trey Burke and the 5-foot-8 senior got the best of Michigan’s freshman in the first meeting.

Tim Hardaway Jr. had one of his strongest performances of the past two months in West Lafayette and should have the opportunity for another big game. Kelsey Barlow wasn’t a great offensive player but he was the Boilermakers best perimeter defender and Hardaway should be able to take advantage of his absence. Michigan’s sophomore scorer has seemed to play with more confidence of late, despite somewhat mixed results, and could continue to build heading down the stretch.

As when the Wolverines played Northwestern, Michigan needs to take advantage of Purdue’s five men when the Boilermakers aren’t playing small-ball. Travis Carroll and Jacob Lawson are the traditional big men on the Boilermaker roster and the duo combines to make just 1.6 field goals and .5 free throws per game in Big Ten play. They aren’t great defenders and Michigan should be able to exploit the match-up on both ends with quickness. Jordan Morgan and Evan Smotrycz combined for 22 points on 12 shots in the first meeting and the Wolverines controlled both backboards. Morgan needs to run the floor hard for open looks while Smotrycz should be able to stretch the defense for open threes or dribble past either big.

D.J. Byrd and Ryne Smith are lethal shooters and Byrd has been particularly spectacular of late, connecting on 51% of his long range efforts in Big Ten play. Michigan has to overplay the three defensively against both players because they aren’t nearly as comfortable attacking the basket.

Terone Johnson and Lewis Jackson aren’t three point threats. Jackson is 0-6 on threes in Big Ten games while Johnson is 8-of-29. Johnson loves to attack the basket, making 44% of his twos, but he connects on just 41% of his free throw attempts. Jackson is the most difficult to guard because he can do so many little things and has the strength to finish around the cup.

Michigan’s defensive match-ups would seem to work best with Douglass and Novak on Smith and Byrd respectively with Hardaway and Burke guarding Johnson and Jackson. If Burke struggles on Jackson then Douglass is likely to takeover that match-up leaving Burke with one of his more difficult off-ball assignments of the season against Smith.

Michigan is undefeated at home this season and has beaten a number of teams that are better than Purdue. The Wolverines should win this game on paper and Ken Pomeroy’s numbers agree, giving Michigan a 72% chance of victory and predicting a 67-61 final score. The stakes are high, with Michigan still in the Big Ten title hunt, but the Wolverines need to take care of business at home one last time.