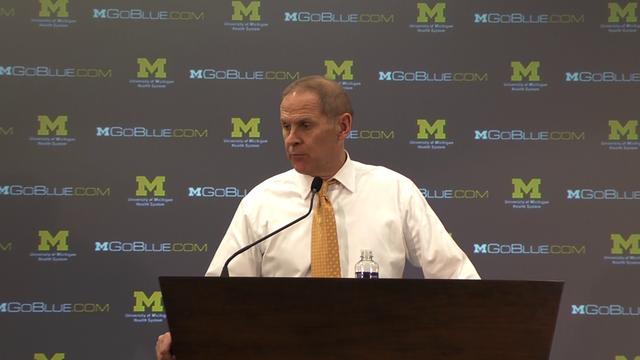 John Beilein’s post-game news conference was brief after Michigan’s home loss to Purdue on Saturday night. Watch Beilein’s comments in the media player below or read the notes and quotes after the jump.

Opening statement: “Purdue played a tremendous game. Their two seniors, [Lewis] Jackson and [Robbie] Hummel, were fabulous and the rest of really complemented them very well. Obviously [Terone] Johnson had a big game. They deserved it and their defense has always been good – a given – and the way they are playing with Hummel as a five man. They are a very difficult to be able to play, and Jackson is so quick, that it’s very difficult to defend them. They spread us and then did what they do and got the W. We’re disappointed because of the circumstances, don’t like losing ever, but 15-1 at home is not a bad year and we’ll try it again next year to go undefeated at home.”

On early defensive lapses: “Both early and late. We got down early and we missed some things. There are a lot of times that it’s not our two seniors making the mistakes. When [Purdue] runs their stuff they run it at such a high speed and they have a great team. They don’t turn it over and give you chances and they look for each other. You couldn’t give them much room and they made their three point shots. Jackson hadn’t made a three all year, Johnson we didn’t play him to shoot a three. Those were ones we weren’t counting. Johnson has not shot foul shots at 40%. They made them, they played a great game.

On coming out too amped up: “I thought we were a little amped up. We had shots go in and out, we took an awful lot of threes. We had some really good balls that did not go in. I thought we came out a little anxious. We just had to play a better game than we did today.

On Hummel’s late threes: “Those were just complete mix-ups in our defense. Very disappointing because we worked on it, we worked on it, obviously we have to work more on it. They were just a lack of communication. Those were the separators, I think it got them to ten. The guys that were involved were disappointed and so are their teammates.”

On how Purdue defended ball screens: “They did really hard hedges. With Hummel, who was probably hedging in kindergarten. They switched a lot of ball screens and made us play one-on-one. We didn’t make some of those shots and that was a big difference.”