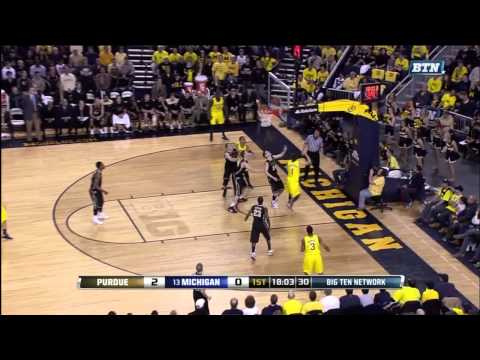 Everything about this game felt wrong from the start. The energy in the building was noticeably lacking without students (who were on spring break) and Michigan got off to a dreadful start on the court as well. Purdue’s offense was getting easy layups as Michigan’s defense broke down and the Wolverines missed a handful of open looks to begin the game. Novak missed a 10-foot jumper which he normally makes, a shot he estimated he’s made at an 80 percent clip this season. Then Hardaway missed a pair of in-and-out threes leading to an airball on his third three point attempt. Follow that with missed layups by Jordan Morgan and Stu Douglass and you couldn’t draw up a more frustrating start for Michigan, who would find itself playing from behind all night.

Terone Johnson had a career night against Michigan and all of his production was a product of driving to the basket. Zack Novak was the unfortunate defensive culprit on most of Johnson’s drives. Novak was able to stay in front of Johnson for the most part but the more athletic Purdue guard consistently finished through contact and right over the top of Novak. Not only did Johnson get to the basket consistently, the Purdue sophomore made 4-of-4 free throws – an impressive achievement for a sub-40 percent free throw shooter this season.

For most of this game, Purdue had answered with a big run of its own whenever Michigan cut the lead to one or two possessions. This was the best stretch for Michigan all game and it allowed the Wolverines to finally take their first lead midway through the second half. It was hard not to think that, just maybe, Michigan had regained enough momentum and would be able to recover from their early woes. Zack Novak and Trey Burke hit threes, then Stu Douglass got involved taking the ball to the basket. In a rare transition opportunity Burke got to the free throw line before finally finding Jordan Morgan on the screen-and-roll for a layup. The Wolverines looked good and Crisler Center had some energy once again but Michigan was unable to sustain its momentum.

Matt Painter called a time out after Michigan took the two point lead and managed to help his team regroup. Once again, Purdue answered a Michigan surge with an emphatic run of its own. Two of the three baskets were from Travis Carroll, the Purdue five man that’s not generally an offensive threat. He had a great look off the screen-and-roll from Lewis Jackson as well as an 18-footer that most probably didn’t realize was in his offensive repertoire. The middle bucket by Ryne Smith was a case of Tim Hardaway Jr. not playing the scouting report. He drops himself way too far in the lane and allows Ryne Smith all sorts of open space, he closes out in an out of control fashion and which gave Smith the open jumpshot after a simple pump fake. If he’s covering Terone Johnson he can afford to help off but Michigan couldn’t afford to leave Smith that open on the wing.

Purdue had regained the lead but Michigan was still down just four points with four and a half minutes to play. Then Robbie Hummel put the game to bed. Both possessions stem from a Jackson-Hummel pick-and-roll and are defended by Trey Burke and Evan Smotrycz. The video serves as a reminder of all the things you don’t want to do against the pick-and-pop. After the game John Beilein referred the plays as a “miscommunication” and stressed that the Wolverines had worked on the situation repeatedly in practice but obviously not enough, adding that both players involved were “very disappointed” after the game. The Hummel threes ended Michigan’s comeback effort and the Wolverines wouldn’t put up much more of a fight. Defensive breakdowns were the root of Michigan’s problems against Purdue and there couldn’t be a more symbolic way for the Boilermakers to put the game away.