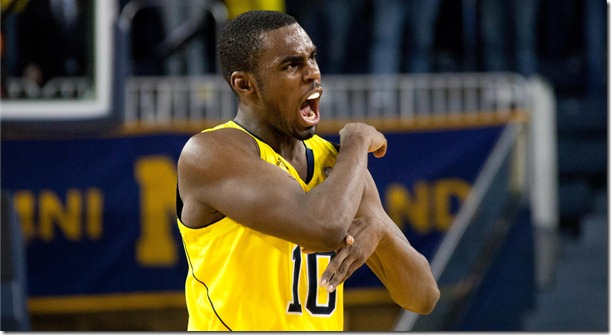 Michigan took the floor like a team expecting a victory lap its final home game. Purdue traveled to Ann Arbor desperate to play its way into the NCAA tournament. This group of Michigan players has been on the other end of the equation as recently as last year but wasn’t up to the task to fend off Purdue. The differences in intensity and focus were obvious from the start as Purdue jumped out to an early 12-2 lead. The Wolverines consistently found ways to fight back, even taking the lead midway through the second half, but Purdue answered every Michigan run before pulling away down the stretch.

Michigan didn’t play a great game offensively but the loss is directly attributable to the Wolverines’ second worst defensive performance of the season. Purdue executed its inside-out offensive attack, which was lethal in stretches during the first match-up, to perfection. The game plan consisted of utilizing the high pick-and-roll to exploit Michigan’s tendency to switch screens on the perimeter and exploit mismatches. Terone Johnson and Lewis Jackson both slashed to the basket at will, often times defended by Michigan’s fives, and their teammates stepped up in support. The Boilermakers hit a number of challenging shots – contested threes, Lewis Jackson’s first three pointer in Big Ten play, a Travis Carroll jumper, Terone Johnson free throws and more – but also got their fair share of easy baskets. The end product was 51% two point shooting and 47% three point shooting for a 57% effective field goal percentage and 1.23 points per possession.

The Boilermakers didn’t do much on the offensive glass, grabbing just 21% of their misses, but maximized their opportunities with just five turnovers and shot the ball well enough to keep Michigan at bay.

The Wolverine offense was solid, netting 1 point per trip on the nose, but just not enough to keep up with Purdue’s torrid offensive pace. Michigan was effective around the hoop, making 57% of its twos, but couldn’t string together enough consistency offensively. The Wolverines settled for threes, especially late in the game, and weren’t productive with the long range efforts while making just 9-of-32 three point attempts. Michigan didn’t attempt a free throw in the first half and only got to the line four times in the second.

Michigan only turned the ball over on 14.8% of its possessions but the turnovers always seemed to kill any sort of offensive momentum. The Wolverine offense might have been more negatively affected by Purdue’s dearth of turnovers rather than turnover problems of its own. U-M only scored four points off turnovers and just two points in transition. The Wolverines ability to run selectively off of defensive rebounds and turnovers has proven to be a huge boost in recent wins and was completely neutralized.

It’s nearly impossible to go through a 30-plus game college basketball season without performances like this. That’s the primary reason that Michigan’s 15-0 home start was so impressive — the Wolverines had avoided or escaped performances just like this one up until this point. The harsh reality of the loss is that it not only cost Zack Novak and Stu Douglass a special moment, it almost certainly kills any realistic shot at a Big Ten regular season championship.

Luckily there’s more to play for. If this flat performance comes three weeks later we are talking about Michigan’s season ending with a bittersweet moment rather than the seniors’ final game in Ann Arbor. The Wolverines are playing for seeding, in both the Big Ten and NCAA tournaments, and need to figure out a way to build from this loss going forward.