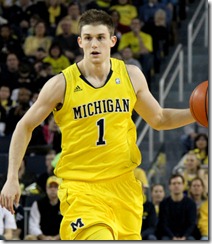 Free money! We’ve partnered with Draftstreet to run daily & weekly fantasy games and they are giving away free prize money. All you have to do to win is select eight college basketball players with a given salary cap and hope that your team outscores the competition this Saturday.

Signing up is free and there’s $150 up for grabs if you submit your picks by Saturday. Just hit the link to sign up.

Michigan’s senior night loss to Purdue was disappointing because it was a significant blow to the Wolverines’ Big Ten championship hopes but what sort of damage did it do to their NCAA tournament resume?

Most bracketologists haven’t dropped Michigan too far down the S-curve with many leaving the Wolverines clinging to the back end of the 3-seed line where they sat last week at this time.

After the jump find an in-depth look at Michigan’s resume, a roundup of what notable bracketologists are saying about the Wolverines, a look at the Big Ten’s NCAA tournament worthy teams and more.

We’ll also keep a close eye on the rest of the Big Ten and let you know who’s in, who should be in, who could be on the bubble and which games this week have the biggest tournament implications. With five teams in the Top 25 and five teams with 20 or more wins, the Big Ten still remains arguably the best conference in the country. If the season ended today, the Big Ten would likely put seven teams into the Big Dance.

Forget the debates, you need a rooting guide for the final week of the regular season. Michigan doesn’t have to worry about auto-bids and bubble teams but there’s no harm in rooting against the teams around Michigan’s seed line on the S-curve.

Michigan still controls most of its own destiny with respect to NCAA tournament seeding. The Wolverines should hold onto a very good, protected seed by taking care of business with two winnable but tricky road games and winning at least one game in the Big Ten tournament. However, other schools will inevitably make conference tournament runs and end their seasons so Michigan’s best bet to earn a nice spot on the bracket is to finish strong over the next two weeks.