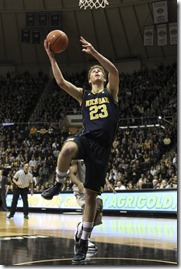 Borrowing a post concept from the esteemed Kevin Pelton of Basketball Prospectus. Here’s a closer, in-depth, look at Evan Smotrycz’s performance against Illinois.

Evan Smotrycz’s struggles since the calendar year turned to 2012 are no secret. The 6-foot-9 sophomore is shooting just 43% on twos and 27% on threes in Big Ten games and is averaging just five points and four rebounds in 20 minutes per game. That comes after a six game stretch in December where Smotrycz made 17-of-26 threes (65%) and averaged 15 points and nine rebounds per game. (Photo: Dustin Johnston)

The one recent outlier in Smotrycz’s struggles was his big performance against Illinois at the Crisler Center on February 12th. Smotrycz scored 13 points on six field goal attempts, grabbed three rebounds, handed out two assists and had four steals. He wasn’t only productive on an individual level, Michigan outscored Illinois by 11 points during the 29 minutes that he was on the floor.

After the jump we dive into Smotrycz’s performance with video and analysis to see what went right, what went wrong and what the sophomore can look to replicate against Illinois on Thursday.

Michigan has actually been exposed against undersized five men in the last two games. The Wolverines had fits defending versatile players like John Shurna and Robbie Hummel at the five but were significantly more successful scheming their defense around guarding Jared Sullinger and Meyers Leonard. The dynamic is interesting because Michigan has used the small-five recipe for success throughout John Beilein’s tenure in Ann Arbor.  While it might not have worked against Northwestern or Purdue, the Wolverines will have that opportunity against Illinois.

The beauty of the small ball look is that spreading the floor with a shooter opens the offense for everyone to get involved. You will see time and again in the clips above that good things tend to happen with Smotrycz on the wing. Suddenly back door cuts are open, there’s space in the middle of the lane for Michigan’s drivers and Smotrycz has room to create.

Smotrycz played significant minutes at both the four and five positions against Illinois. This was one of the rare cases where the 6-foot-9 forward was a match-up problem for the opponent at both positions.

At the five position, Smotrycz was able to neutralize Meyers Leonard with his defense despite Leonard’s size advantage. Smotrycz was more physical than we’ve seen and really battled to front the post for most of his time on the floor. On the other end of the floor, Leonard was hapless in attempting to defend Smotrycz on the perimeter. Leonard routinely sunk into the paint on the pick-and-roll, leaving the pick-and-pop wide open. Not only was Smotrycz open on the pop, he converted two of three long range efforts.

Illinois couldn’t find a suitable defensive option at the four position either. Tyler Griffey was the primary option, and he had a big day scoring the ball but couldn’t do much of anything defensively against Smotrycz. Myke Henry is a more prototypical undersized strong forward but he also seemed uncomfortable guarding a bigger player on the perimeter.

Smotrycz did a great job of using the pump fake and dribble drive in the first meeting. Illini defenders were obviously cognizant of his jumpshooting ability and he consistently generated space with his pump fake. He put the ball on the floor with confidence and, more often than not, made good things happen. His 6 free throw attempts were the second most he’s attempted all season and he earned them by attacking the basket. Once he had the confidence from a couple early baskets, he became significantly more aggressive, even knocking down a step back jumper over Tyler Griffey.

At times Smotrycz is more versatile with the ball on the wing because he can use his size as a passer. If someone like Myke Henry is guarding him, Smotrycz can just pass over top. If Illinois goes with a taller defender, like Meyers Leonard or Tyler Griffey, they have to respect his ability to put the ball on the floor and can’t provide adequate ball pressure to prevent easy passes.

Smotrycz loves to gamble defensively and the statistics back that tendency up. Smotrycz is averaging a team high 5.3 fouls per 40 minutes in Big Ten games but only trails Stu Douglass in steals per 40 minutes at 1.3. He had four steals in this game and his active hands were in full effect both near the basket and on the perimeter. The forced turnovers usually led to easy transition baskets – touchdowns for turnovers as Tom Izzo would say – but he also got caught reaching his hand in the cookie jar with four fouls.

With so much focus on the variability of Smotrycz’s performances, the risky defense adds to the mix. One five or six minute shift can be completely different based on the result of a steal to a transition layup from a steal versus a quick foul.

Michigan will need a strong performance for Smotrycz in Champaign. Just like his roommate, fellow sophomore Tim Hardaway Jr., so much of Evan’s successes and failures are based on the first several times that he touches the basketball. He never has a problem finding a shot in the Michigan offense and if he makes his first attempt, the rest of his game seems to grow from there. There are certainly exceptions to the rule but it’s a safe bet that Smotrycz is going to play better defense, grab more rebounds and play a significantly better all around game if he starts on the right note.

The million dollar question is whether Smotrycz’s big game against Illinois is repeatable on the road this Thursday. Match-up wise, there’s a lot to like. Smotrycz performed well against Leonard, Griffey and Henry in the first meeting and there’s no reason to believe that any of those three players has changed their game significantly. But at the end of the day, it all comes down to Smotrycz making the most of his opportunity. He probably won’t play 29 minutes – Jordan Morgan was in significant foul trouble during the first meeting – but he is almost certain to get a chance at a couple of open threes. When all is said and done, his ability to knock down those open looks could be the difference in the game.