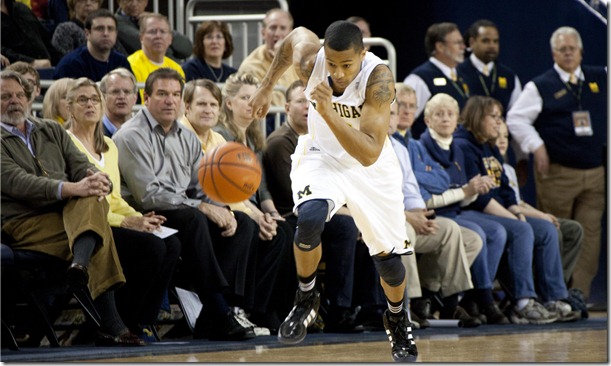 Indiana handled Michigan State at home last night and preserved Michigan’s slim chances of earning a share of the Big Ten regular season championship. For now, the ball is in Michigan’s court once again. The Wolverines have to win their next two games (Thursday at Illinois and Sunday at Penn State) and then sit back and hope that Ohio State can upset Michigan State at the Breslin Center on Sunday evening. Impossible? Certainly not. Likely? Probably not so much.

Ken Pomeroy’s rankings give Michigan a 54% chance of beating Illinois and a 70% chance of knocking off Penn State. The statisticians among you will note that’s a 37.8% chance of Michigan winning out. Combine that with the 39% chance that Pomeroy’s computers give for an Ohio State upset in East Lansing and you’re left with a 14.7% chance of Michigan earning a share of the Big Ten title.

Perhaps the most important development is that Michigan will now enter its final two games knowing there’s still a share of the Big Ten title to play for. The final game against Penn State will tip off three hours before Michigan State and Ohio State get underway so the Wolverines should have plenty of motivation in the final week of play.

The Rise of the Point Guard

Mike Rothstein wrote a great piece at ESPN regarding the rise of the ball screen in Michigan’s offense. The influx of ball screen offense began last season with Darius Morris and continues to be a focal point with Trey Burke.

“We started running more ball screens with Darius and spacing the floor,” senior guard Stuart Douglass said. “They wouldn’t help off our shooters, and they took a lot of our sets away, so the simple answer was run a ball screen out of Darius and play basically two-on-two with him and Jordan (Morgan) in there, point guard and big.

“It’s helped me out a lot, because it gives me confidence,” Burke said. “It allows me to make plays that I know I can make within myself or for others. That’s what I feel like and it definitely helps the team. “When it comes down to it, (Beilein) just tells me to make plays.”

The pick-and-roll is here to stay and Burke has done a good job thus far. He doesn’t have the size to pass over defenders like Morris but he has the more consistent outside jumpshot which helps him punish defense for going under screens and sagging into the lane. Conversely, Michigan has seemed to run fewer ball screens for Tim Hardaway Jr. of late. The 6-foot-6 sophomore had great success late last season running the ball screen from the left wing but has struggled in similar situations. The reasons why aren’t hard to figure out. Last year down the stretch Hardaway was making over 40% of his threes, this year he’s well under 30%. Defenders are sagging off of him and taking away the drop off pass to Jordan Morgan. Many of Hardaway’s turnover struggles have been from ball screen looks when he tries to force a pass that just isn’t there.

Rothstein also caught up with Darius Morris who reiterated that he has no regrets from his decision to enter the NBA draft and continues to put in work every day ($).

Last year we were treated to Jalen Rose’s Fab Five documentary around this time. This year you’ll have to settle for some throwback footage from the Wolverine Historian. Here are some offensive highlights from Michigan’s 80-73 win over Minnesota in 1993.

And some more from a ‘93 win over Penn State:

Bruce Weber also had his weekly pre-game presser which you can watch here.

The Making of a Hype Video

Corey Person and Tim Hardaway Jr.’s hype video during the Ohio State game was a surprising success but it took plenty of contemplation and deliberation to prepare:

David Merritt wears plenty of hats that you should be familiar with. He’s a former Michigan captain, part time contributor to UM Hoops, founder of Merit Goodness, and the voice of Michigan basketball on the radio. Merritt is nominated for the Buick Human Highlight award and needs your vote. The award is given to a former Division I athlete that’s making a positive impact in the community.