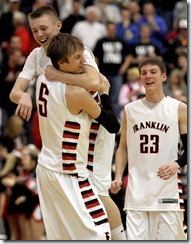 John Beilein was in Indianapolis last night to watch one of his prized 2013 commitments, Zak Irvin, in an opening round playoff battle. Hamilton Southeastern and North Central were both ranked among the top five teams in the state of Indiana before Tuesday night’s sectional battle but the season would have to end for one squad. The game was back-and-forth throughout before being settled with a Gary Harris buzzer beater.

The highlight of the night was 2012 Michigan State commitment Gary Harris draining a 35-foot buzzer beater to win the game.

More on Glenn Robinson III, Mitch McGary and Luke Kennard after the jump.

Glenn Robinson III faced double and triple teams all night but stayed the course and helped Lake Central to a sectional opening win over Munster. Robinson had only eight points in the 66-56 win as Lake Central was just 13-of-30 from the free throw line but supplied a great quote in the post game: “triple team me and my teammates will kill you”. The Post Tribune profiles Robinson and his steadiness against the Munster pressure. A year ago Robinson starred in the playoffs against Munster, scoring over 30 points including a buzzer beater to send the game to overtime, but Lake Central lost in the extra period.

2013 Michigan target Tyler Wideman had 11 points and 12 rebounds in the win. Lake Central will face East Chicago next on Friday.

Brewster Academy was profiled extensively by Peter May of ESPNBoston.com. The New Hampshire prep school on the shores of Lake Winnipesaukee has grown into a breeding ground for Division I prospects and is on the verge of its first perfect season in NEPSAC history.

The article is a good read for a taste of prep school basketball and understanding Brewster’s dominance but there are also some notable bits on Mitch McGary and the NBA:

McGary has committed to Michigan but also has drawn the attention of the National Basketball Association. While commissioner David Stern does not want NBA scouts in high school gyms, he cannot stop them from evaluating the 6-foot-8 McGary, a postgrad student who could declare for the 2012 draft because he will be 19 at draft time and because his high school class (2011) is one year removed from the draft.

McGary said he isn’t remotely ready for the NBA and is looking forward to playing at Michigan with Glenn Robinson III, an Indiana high school teammate at Ann Arbor and the son of former NBA star Glenn Robinson.

The NBA has been mentioned as an option for McGary in passing because he’s eligible as a post-graduate so it’s nice to see him shoot that notion down in print – as remote as chances may have been. Brewster begins NEPSAC playoff action this afternoon in the NEPSAC Class AAA Quarterfinals against Winchendon.

Another Michigan recruiting target and another perfect season on the line. Freshman guard Luke Kennard has transformed Franklin basketball this season and led his team to a triple overtime win over a Dayton Chaminade Julienne that blew out Franklin in last year’s playoffs. Kennard had 33 points in the 78-75 win.

“We all have heart,” said Kennard, who also had 33 points.

Kennard was money when Franklin needed him most. He tallied nine straight points and 14 of 19 in a late-heated stretch.

“I know one thing and that’s get the ball to your play maker,” Franklin coach Brian Bales said.

Kennard has already visited Michigan several times and is a Wolverine priority in the class of 2015.