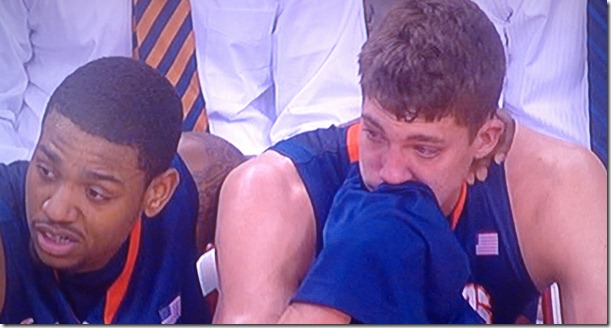 Michigan opens the final week of Big Ten play with a Thursday trip to Illinois. The Wolverines haven’t won at Assembly Hall since 1995 – their longest Big Ten road drought – and will look to snap that streak against an Illini team that’s faltering down the stretch. A win would preserve Michigan’s hopes of sharing the Big Ten title and continue to solidify the Wolverines’ seeding in the NCAA tournament while righting the ship after a disappointing home loss to Purdue.

In a business like performance Michigan handled a struggling Illinois team at home three weeks ago. The Wolverines outshot the Illini, won the turnover battle and shot more free throws, managing to keep Illinois comfortably at bay throughout the final 30 minutes of play. Michigan had three starters in double figures (Hardaway, Burke and Novak) and found timely bench production from Evan Smotrycz (13 points) and Matt Vogrich (8 points).

Since the first meeting…

The Illini have continued their tailspin, now losing nine of their last 11 games while watching a 4-1 conference record morph into a 6-10 train wreck. Bruce Weber’s fate is all but sealed and Meyers Leonard is more than likely playing for NBA scouts rather than trying to save Illinois’ crumbling season. Illinois has failed to reach a point per possession of offensive output over the last four games but did snap a six game losing streak with a comfortable home victory over Iowa on Sunday.

Illinois’ collapse can’t be overstated but there are still talented players on the roster. Brandon Paul is capable of scoring the basketball at a high level and Meyers Leonard is a projected lottery pick. If they get some early confidence, this team can be dangerous. However, this is also a dysfunctional team without much backbone, apply some early pressure and the Illini have shown the ability to crumble.

Paul Klee takes you inside the Illini locker room with this quote from Bruce Weber:

There seems to be a case of envy in the Illini locker room. In describing some of the issues that have faced the Illini this season, Weber has used certain opponents and an incoming recruit as examples of what the Illini are lacking. Weber said he would relay a text message from recruit Michael Orris to the team. The coach said Orris sent an inspiring text that spoke to commitment to a team. “That’s what it’s about. That’s why Michigan’s winning, because of Stu Douglass and Zack Novak. They want to win,” Weber said.

Illinois is still an average to above average defensive team that simply can’t score the basketball. Bruce Weber’s offense ranks 10th in the conference and isn’t particularly strong in any statistical area other than two point shooting.

Stop Leonard. Meyers Leonard had four points and an offensive rebound in the first three possessions the first time these teams met. He went on to score just one additional point in the final 38 minutes of play. It’s tough to imagine Leonard being less effective in this meeting but Michigan needs to neutralize the Illini big man. If he gets good position and his teammates get him the ball – two big ifs – he’s more than capable of a performance like his last game against Iowa: 22 points on 13 shots and 14 rebounds.

Tyler Griffey. Griffey scored 18 points in Ann Arbor and has scored 25 points in the other 15 Illini Big Ten games to date. Michigan can’t allow the 6-foot-8 junior to have open three point looks as he hasn’t diversified his offensive game much beyond shooting open jumpshots.

Fouls. The great road equalizer in the Big Ten. Michigan doesn’t have the front court depth to get in foul trouble – see: Northwestern – and has run into problems with foul trouble on the road. Michigan allows fewer free throws than any other Big Ten team and Illinois ranks among the bottom third in getting to the charity stripe. However, the Wolverines picked up seven straight fouls during the second half in the first meeting and Brandon Paul is among the best at getting to the charity stripe.

Dominate the turnover column. Michigan has done a great job of valuing the basketball and forcing turnovers all season. The Illini lack a true point guard and have struggled with turnovers offensively all season. Michigan needs to force turnovers and turn them into points by pushing the tempo in the proper situation. Those easy transition and secondary break – Michigan outscored Illinois 10-0 in transition points in the first meeting – opportunities have provided a huge spark to the Wolverine offense when it has faltered.

Play your scout. Brandon Paul and DJ Richardson (although he struggled mightily in the first meeting) are the primary Illini three point threats. Sam Maniscalco, Myke Henry, Tracy Abrams and Joseph Bertrand all shoot under 30% from long range and are not worthy perimeter shooting threats.

What to expect from Brandon Paul? Paul is a deadly scorer when his three point shot is working. He’s capable of exploding for easy offense – especially at the free throw line – but he’s also not without his faults. He attempts 48% of his field goals from three point range and struggles with turnovers at times (7 in Ann Arbor). Look for Stu Douglass to defend the junior and focus on keeping him out of the lane and contesting threes without fouling.

Michigan is locked into a Big Ten Tournament bye and its Big Ten regular season championship hopes remain alive. The Wolverines have now won 13 straight games following a loss, the fifth best tally in Division I, and should remain in great shape if they can avoid their first losing streak of the season. A win at Illinois would sufficiently right the ship after Saturday’s disappointing loss and set the stage for a dramatic Sunday conclusion to the 2012 Big Ten season.