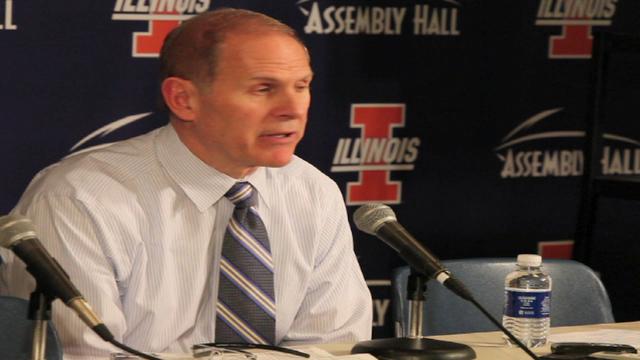 John Beilein met with the media after Michigan’s first win at Illinois since 1995 and discussed Tim Hardaway Jr. and Trey Burke’s big performances among other things. Watch his press conference in the embedded media player below or find notes and quotes after the jump.


Opening statement: “I really like what we were able to accomplish today given the fact that we had a really disappointing loss to Purdue at home on Sunday. It was one that knocked us all back a little bit because we had been so good at home. So today I was worried about confidence.That’s all we tried to preach the last couple of days: faith, confidence and swagger. We really played with a lot of that today and that was the difference. Tim Hardaway and Trey Burke were sensational. When they made a run in the second half and it looked like it could go the other way, Tim really stepped up – like he did last year so many times and a couple of times this year.

On Tim Hardaway Jr.’s big performance: “The best thing that happened — we have a winter break right now and Tim has used every bit of it. He’s been in the gym like crazy. He made 82 out of 100 on the gun the other day. We’re looking at his shot, looking on video for any different type of quirks that we can work out. He’s such a student of the game and he’s really worked at it.”

More on Tim: “He’s a special young man. He’s growing every day at not being so hard on himself. Even the Purdue game his first three shots went in and out and those don’t concern me at all. It means your right there, earlier in the season he was way off. He’s upset as anyone gets and he beats himself up. We just say Tim, ‘it’s going to be fine and just move on’, ‘who cares’. His care level is so high that it can be a negative. Today his confidence was very high.”

On how good the team can be when Hardaway plays like this: “Well when he just plays. He had 11 rebounds, he defended well and it was a key for us last year. Does he carry the team? No. But he certainly enhances our ability to win against good teams like you saw today.”

On the potential for a Big Ten Championship on Sunday: “There’s a lot going on. We’re 4-4 on the road in the league. In a year where Big Ten teams are so good at home, it’s a goal to finish 5-4 on the road in the league. We won’t think much more about [a Big Ten Championship scenario], we just have to take care of our business at Penn State on Sunday and worry about the rest later.”

On history at Illinois: “My assistants did a great job of finding that. It’s pretty consistent everywhere. There’s a lot of people that haven’t won at a lot of places over time. It is nice [to get the win at Illinois] but we’re more proud of the fact that it was another road win and we’ve been very successful at not losing two in a row.”

On Trey Burke: “I just love coaching the kid and he’s done a wonderful job controlling the game.”

On Jordan Morgan and Evan Smotrycz: “We had foul trouble and both of them had little stingers. One in the shoulder [Morgan] and one it looks like in the hip [Smotrycz]. They are banging in there with Leonard – a strong kid. They go to the high-low, which is extremely hard to defend with a big guy.”