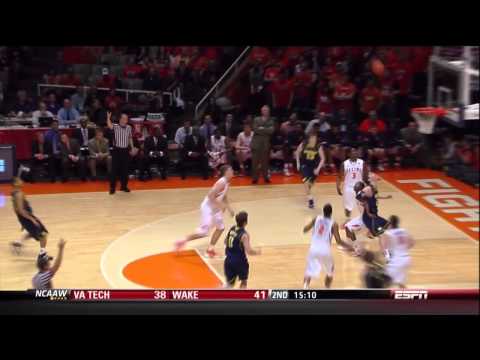 With the Illini on a small surge to tie the game at 14, Michigan’s heady freshman point guard took control of the game. Burke rattled off a personal 8-0 run to help Michigan regain control of the game. In the first play, Burke forces an Illinois switch with the ball screen and is left isolated on Meyers Leonard. Obviously a mismatch, the scouting report on Burke is that he’s going to shoot the three when a big man is defending him. With Leonard sagging into the lane, that’s exactly what Burke did. Following an Illinois turnover on the next possession, Stu Douglass starts a bit of transition offense and is able to find Burke on the wing. Wide open, Burke calmly knocks down the early shot clock look.  On the ensuing defensive possession, Evan Smotrycz knocks the ball away and Burke finds himself in the right spot at the right time, grabbing the ball and streaking down the floor for a dunk. In just over a minute of clock time, Burke turned a tie game into an eight point Wolverine lead with ease. There’s no doubt that Burke’s summer workouts are paying dividends, in the 30th game of the season Burke is still shooting the ball well and even showing off the athleticism to throw down a dunk.

2. Colton Christian provides energy late in the first half

With both Jordan Morgan and Evan Smotrycz on the bench in foul trouble, it was Colton Christian that got the call to play the five position for John Beilein. Unlike the Northwestern game, when everything seemed to go wrong after Morgan and Smotrycz were relegated to the bench with two fouls, Christian contributed and helped preserve the Wolverine lead to close the first half.  He got off to a quick start, scoring an easy layup by back-dooring Meyers Leonard and receiving a perfect pass from Zack Novak. Christian fails to box out Brandon Paul on a Meyers Leonard free throw but recovers to block Paul’s shot. Later in the half, Christian runs down an offensive rebound off of a missed three from Matt Vogrich and earns the Wolverines an extra possession. He’s not going to change that game but Michigan couldn’t ask for much more when calling on Christian, out of position at the five, in a pinch.

This was vintage Tim Hardaway Jr. The player that Michigan fans were spoiled by down the stretch last season and have been searching for all year. Brandon Paul pulled the Illini within one and Hardaway answered the bell. On his first bucket, he catches Brandon Paul napping watching a ball screen and pops open on the right wing. D.J. Richardson answered with a three of his own and the Illini remained hot on the Wolverines’ tails. Once again, Hardaway answered.  Novak received the ball on the right wing and dribbled toward the middle, looking for Jordan Morgan on a back cut. It wasn’t there, because Richardson had sagged off of Hardaway to help. Novak recognized it and got the ball to Hardaway, who pulled up and knocked down his second trey in the last two minutes. Hardaway’s strong performance was more than just a great shooting night. On the next defensive possession he knocked the ball away from Brandon Paul, off his leg, and out of bounds.

4. Defense steps up and gets crucial stops

With just under 12 minutes to go in the game, the Illini had three chances to either tie the game or take the lead while trailing by just two points. On all three plays, they came away empty handed. On the first chance, Michigan plays good defense and rotates near flawlessly, causing Brandon Paul to chuck up a contested fade away at the horn. On the second, the Wolverines are caught out of position, as Colton Christian gets caught on a hard hedge off the screen. The Illini dump it down low to Leonard, who only has the 5-11 Trey Burke between him and the hoop. Instead of taking it up strong and getting an easy bucket, he turns and kicks it to the opposite wing to an open D.J. Richardson, who is unable to knock down the shot. Finally, on the third, the Wolverines once again have good rotation and are able to keep the ball out of Leonard’s hands in the post, and instead force a contested pull up from Bertrand. Forcing difficult shots is only half of the recipe, Michigan was also able to prevent second opportunities with clean defensive rebounds on all three possessions.

5. 9-0 Wolverine spurt puts the game out of reach

Hardaway kept the Illini at bay with some big baskets and Michigan’s defense had buckled down as the lead dwindled to just one possession. The last two sequences bought enough time for Michigan to finally find a decisive run. Yet again, everything starts with Tim Hardaway Jr. First he knocks down a three from the right corner, a product of Burke’s penetration and Novak’s extra pass. Of course, the entire play isn’t possible without Jordan Morgan earning another Michigan shot with a critical offensive rebound.  The next time down the floor, Novak receives the ball in the right corner and drives baseline. As he leaves his feet, he finds Hardaway at the top of the key. The Illini defender doesn’t close out under control, allowing Hardaway to use a quick pump fake, followed by a single dribble to the right and a pull up from just inside the arch. Money.

Trey Burke has carried the Wolverines plenty this season and didn’t want to get left out of the act. On the next Wolverine basket he weaves his way into the lane and cripples the Illini defense. As he pivots past Paul, he uses a quick pump fake to get Leonard off of his feet, leaving the easy dish to Jordan Morgan for the wide open flush. Then off of an Illinois turnover, Morgan finds Burke with a quick outlet pass and it’s off to the races. Five dribbles later, Burke has traveled three fourths of the way down the floor and coasted past the Illini defense. Burke draws the contact at the bucket and makes his two free throws, stretching Michigan’s lead to 11. Free throws would be the key from then on as the Wolverines made theirs (21-23 FT) and never allowed the Illini closer than five points.

Thanks to Josh Houchin for extra help on this edition of Five Key Plays.