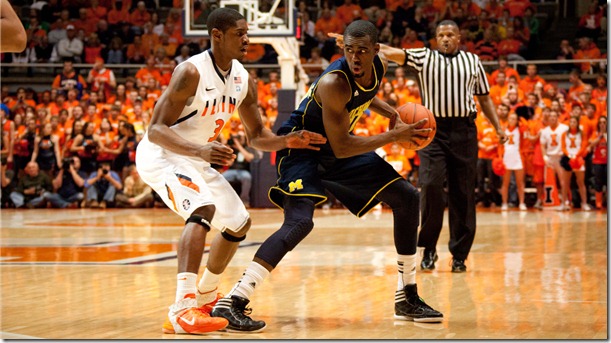 On the heels of arguably its most disappointing performance of the season, Michigan responded with a convincing road win at Illinois. The Wolverines rode monster performances from their stars – Tim Hardaway Jr. scored 25 points on seven shots and Trey Burke tallied 21 points on 13 attempts – and managed to fend off every Illini run. Michigan never trailed and prevailed down the stretch by converting at the charity stripe. The 72-61 victory was Michigan’s 22nd of the season and means that the Wolverines enter the final weekend of the regular season with a chance to hang their first Big Ten Championship banner since 1986.

The difference between winning and losing in the Big Ten is slim. This game was certainly a melodramatic exaggeration of that fact but the point remains. Illinois had chances to take the lead in the second half but every time the situation grew dicey, Michigan made the big shots that the Illini missed. Don’t make this win out to be more than what it was. The Wolverines beat a dysfunctional Illinois team exactly the way that they should. Road games in the Big Ten are never easy victories but if this group of Wolverines is serious about their goals and aspirations, they should be able to handle a rudderless Illinois squad on the road. Still, the performance should do wonders to right the ship, restoring confidence after Saturday’s home debacle.

It’s always nice to marvel about games that Michigan wins despite an underwhelming shooting performance but this game was a bit less complex. The Wolverines shot the ball extremely well, especially from the perimeter. Michigan actually made a higher percentage of its threes (9-of-19, 47%) than its twos (12-of-26, 46%) en route to a sizzling 56.7% effective field goal percentage. The Wolverines combined hot shooting with frequent, and productive (21-23 FT), trips to the charity stripe for 1.13 points per possession.

Uncharacteristically, Michigan lost the turnover battle to Illinois. The Wolverines coughed the ball up on a fifth of their possessions and the giveaways allowed Illinois to hang around in the game. Illinois, a team that usually struggles to value the basketball, gave the ball away on just 12.5% of its offensive possessions.

Other than forcing turnovers, Michigan’s defense was strong and held the Illini to just .95 points per trip. Similar to the offensive side of the ball, it came down to shooting. Illinois struggled shooting the ball inside (43%) and out (29%). Unlike the first meeting between these two teams, the Wolverines dominated the defensive glass. Michigan rebounded 80% of Illinois’ missed shots thanks to great defensive rebounding performances from Tim Hardaway Jr. and Jordan Morgan.

Michigan’s blown opportunity on Saturday still hurts – the Wolverines would control their own destiny with that game in hand – but this week has provided a second life. Michigan will take the floor on Sunday at the Bryce Jordan Center knowing that a chance to raise a banner in Crisler Center remains with a victory. The scenario is simple: beat Penn State and sit back and root for Ohio State to knock off Michigan State.

Big Ten Tournament scenarios are also solidifying. The Wolverines are locked into at least a three seed in Indianapolis but would clinch a No. 2 seed (regardless of what Ohio State does) with a win at Penn State.