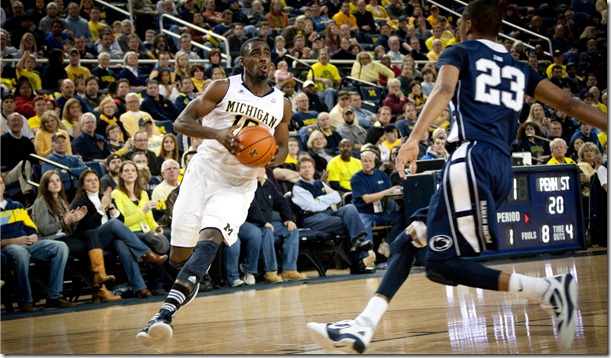 Michigan opened Big Ten play with an easy home win over Penn State all the way back in late December. The Wolverines were wrapping a perfect month of December and cruising into Big Ten play with subtle confidence but still had many real questions to answer. The 18 games since that one haven’t always gone according to plan but now Michigan has an opportunity to bookend the season with a win at State College. A win combined with an Ohio State upset in East Lansing would earn the Wolverines a share of the Big Ten championship, their first since 1986.

When Pat Chambers inherited Penn State’s depleted roster, nobody expected much. All of the major cogs from Ed DeChellis’ NCAA tournament squad had graduated and Chambers was left with Tim Frazier, a player that John Beilein mentioned Michigan intentionally played off last season, and very little else. 12-18 (4-13 Big Ten) certainly doesn’t sound like anything special on paper but it’s tough to imagine any head coach squeezing more out of this roster.

Regardless of their talent, the Nittany Lions certainly play hard. Their two strengths as a team could both be defined as “effort stats”: forcing turnovers and crashing the defensive glass. Unfortunately they also play a bit too hard at times, sending opponents to the line more than any Big Ten squad. When Penn State opponents are able to hold onto the ball, they usually make their shots. PSU opponents are scoring 1.09 points per possession with a 54% effective field goal percentage.

In a league as difficult as the Big Ten, offensive success requires a bit more than effort. Penn State simply doesn’t have the talent or experience to compete on the offensive end. The Nittany Lions have scored just .96 points per trip in league games – for comparison Michigan has failed to surpass .96 PPP in just three Big Ten games -and are the worst shooting team in the conference, inside and out. Penn State makes just 45% of its twos and 29% of its threes for a 44.5% effective field goal percentage.

Tim Frazier. Tim Frazier. Tim Frazier. Frazier isn’t the best player in the league but he might be the most important player. Frazier uses 32.4% of Penn State’s possessions, the ninth most nationally. He also ranks second in the Big Ten in minutes per game and second in the nation in assist rate (45.9%). Frazier had 18 points in the first meeting but it cost him 18 field goal attempts and five turnovers. The junior guard is jet quick and a creative finisher in the lane but struggles with his outside shot, connecting on just 28% of his long range efforts.

Injuries. Two starters from the first meeting, Cammeron Woodyard and Billy Oliver, will both miss this game with injury. Oliver was forced to end his career due to concussion woes while Woodyard is out for the season with a broken bone in his foot. Without Woodyard and Oliver, Penn State is without two of its stronger three point threats and has just two active players that average over 4.3 points per game in conference play.

Give up the three. The Wolverines should pack in their defense and force the Nittany Lions to prove their mettle as perimeter shooters. Jermaine Marshall is the best active three point shooter on the roster and he’s connecting at just a 30% clip in league play. Tim Frazier (29%) and former walk-on Nick Colella (27%) are the only other players that have made more than three triples in Big Ten games this season.

Battle down low. Sasa Borovnjak, Ross Travis and Jonathan Graham aren’t necessarily household names, or all that skilled down low. However, those three bigs along with, offensively challenged, rebounding dynamo Matt Glover (30% on twos, 18% on threes) will fight around the basket and scrap as a unit.  It’s important for Michigan to be physical around the bucket and not give up easy baskets to Penn State’s complementary players early.

Attack and get to the line. Tim Hardaway Jr. is coming off of his best game of the season and excelled in the first meeting against Penn State. Hardaway had 26 points in the first meeting and was 10-of-11 inside the arc compared to 1-of-7 from three point range. As a team, Michigan made 60% of its twos and the Wolverines would be well suited to attack the Nittany Lion defense.

Ohio rivals reunited. Several Big Ten games have been a bit of an Ohio freshman reunion for Trey Burke. Michigan’s freshman guard has faced off against Travis Trice (MSU), Traevon Jackson (Wisconsin) and Penn State’s Trey Lewis. Burke and Lewis also battled in the state semifinals last season and are well familiar with each other and with Woodyard’s injury, Lewis should get an opportunity.

Penn State is not a great team and has significant injury woes to deal with. However, the Nittany Lions have put up a strong fight at home. They are 4-4 in Big Ten home games and only one of their four home losses (Minnesota) has been decisive. It will take a sharp effort but Michigan is more than capable of winning this game, especially given what’s on the line. Ken Pomeroy says Michigan by six with a 73 percent chance of victory.

This & That. Michigan State and Ohio State tip off Sunday at 4 p.m. on CBS. If Michigan wins, an Ohio State win could earn the Wolverines a share of the Big Ten title. John Beilein told reporters that Michigan plans to fly back after the game as usual and hopefully catch the end of the game when they land.

When he was the head coach at LeMoyne in the early 90s, John Beilein coached against Pat Chambers – as a player – at Philadelphia Textile.