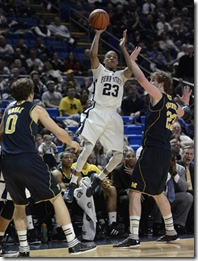 Michigan and Penn State opened the game trading offensive blows and appeared to be headed for a barnburner. The Nittany Lion offense eventually cooled down while Michigan kept its sizzling momentum. The Wolverines opened up a 19 point lead in both halves and appeared to have the game in hand. The half empty Bryce Jordan Center was silent and Michigan’s thoughts undoubtedly drifted toward the Big Ten Tournament and beyond. In a blink, the Nittany Lions rattled off a 13-0 run and made the Wolverines work for their win. Michigan managed to regroup down the stretch and bookended its regular season with a six point win. The victory marked the end of Michigan’s most successful Big Ten campaign since 1993 and a final regular season record of 23-8 (13-5 Big Ten).

Michigan beat plenty of teams this season with Evan Smotrycz and Tim Hardaway Jr. struggling offensively. When those two score the ball efficiently, Michigan goes from a good offensive team to an almost unstoppable offensive team. The effect of that firepower was on full display today. The Wolverines turned the ball over more than they have in any Big Ten game (23.7% turnover rate) but still scored more points per possession than in any other league game. Michigan reached 1.2 points per trip thanks to torrid shooting, both inside and out. The Wolverines made 15-of-24 twos and 10-of-18 threes for a season best 71.4% effective field goal percentage. Looking down the stat sheet, there weren’t many bad, or even below average shooting performances. Hardaway, Burke, Douglass, Novak, and Smotrycz all had effective field goal percentages well over 50% and Vogrich and Morgan were the only two to struggle.

The Wolverine defense was solid and it’s game plan to defend jet quick guard Tim Frazier was more than effective, holding the junior to 11 points on 16 shots with three turnovers, but the Wolverines struggled to finish defensive possessions with clean rebounds. Penn State rebounded 44.1% of its missed shots and tallied 15 second chance points. Michigan’s rebounding has regressed a bit down the stretch and that’s something that could catch up to the Wolverines either in Indianapolis or in the NCAA tournament if they draw a scrappy and athletic team in the early rounds.

Michigan is surging at the right time. The schedule has undeniably eased up but the Wolverines have won six of their last seven games to close the regular season and are playing their best basketball of the year. Tim Hardaway Jr. and Evan Smotrycz appear to be regaining confidence and Michigan’s freshman floor general never lost it. Headed to the Big Ten Tournament with a No. 2 seed, Michigan players and coaches harped on the fact that the Wolverines are playing for championships from here on out.