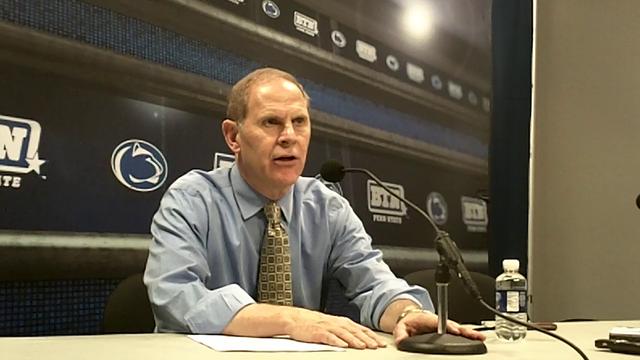 John Beilein discussed Michigan’s win over Penn State as well as the Wolverines’ Big Ten championship hopes going forward. Watch Beilein’s press conference in the embedded media player below or read the notes and quotes after the jump.


“We feel very fortunate that we’ve been able to win games in all kinds of ways. That was unique in the sense that we let them get off to a great start, then battled back and had a comfortable lead, then we extended but probably too early. We had to sort of hang on a little bit because of the turnovers that we had. Our kids will value this win very much. It puts us in position to be in position, if the right breaks go our way, to have a share of the Big Ten Championship which is something that’s very important at the University of Michigan.”

On whether the team had a championship attitude: “We saw it every day in practice. Now it’s down to one of the opportunities that you have to win a championship. This is one and obviously the Big Ten and the NCAA tournaments. We talked a lot about it. This is what champions do on this day. The play with poise and confidence.”

On Evan Smotrycz “That’s important. If we can have that, it makes us a better team immediately. He’s put in a lot of extra time these last couple weeks really settling into what people are going to give him and really valuing the basketball. He had a great backdoor pass even though the shot ended up being blocked, his turnovers are down, his shooting is up. He’s accomplishing more by sometimes doing a little less.”

On the impact of a versatile five man: “We’ll go from one extreme where they’ll play Jordan Morgan completely different. We can pop Evan sometimes, early he got a layup when we rolled him really hard. We’re always changing and he gives us that versatility.”

More on Smotrycz: “He’s almost 6-foot-10, there are very few guys that size playing small forward. He wants to get to it at some point at the highest level. He wants to play a 6-foot-9 multidimensional forward. You can count those guys on one hand. We work very hard to get him shots and opportunities and he really took advantage of it today.”

On the second half struggles: “I saw us get a little bit tired where we called ourselves into a couple of delay offenses that I didn’t call. We just had an emotional game at Illinois to put us in this position and then I think we got tired and when you’re up by 19 or 20 with 10 minutes to go it’s a very dangerous area. With the three point shot and the shot clock it can be 12 in no time and it was and if it gets to 12 in no time then it can get to six. I really applaud Timmy because he had the five turnovers – two back to back – that were just flukes and there he is stepping up and making a big shot when we needed a six point lead.”

On a 5-4 Big Ten road record: “When we started on the road we lost three of our first four but they were at Indiana, at Ohio State and at Michigan State. Three pretty darn good teams. The Iowa game was in the middle of a cluster and Iowa has done that to other people. I don’t think it says anything about what we were doing earlier.It just says the constitution of this team was to stay engaged, stay focused, don’t be afraid playing on the road, embrace it and do your best.”

On whether the team is peaking: “Peaking is a tough thing to understand but there were some moments in the first half where everything was clicking. That’s our job as a coach to be a good February and March team. We’re trying everyday and now going into a Friday game in a quarterfinal, handling this week right is always good. I feel good because we’re finishing the season with wins and very few losses.”

On the first 13 win Big Ten season since 1994: “My assistants have done a great job of really putting this all together so that [the players] know the history of Michigan basketball. I certrainly appreciated it but we’ve went beyond to knowing a lot more about what our history is. We want to get back there but to get there you have to have these mini goals.”

On Trey Burke and whether he’s the best guard in the league: “Normally I don’t do that but I think that’ there’s a lot of educated people that will look at.. .They see him play and they know the value he brings to this team. We lost a very good guard last year in Darius Morris, and for him to do this in the situation he was in. We’re not talking about a right guard or a wide receiver, we’re talking about Denard Robinson as a freshman coming in and doing this. It’s really been great and he couldn’t be calmer than he’s been on the court. I’ll let the educated people make that decision and I’m sure they’ll make the right one.

When further chided about Burke and whether he’s seen anything like that: “You aren’t telling me something new. I go to church a lot. That’s a blessing to have that young man on our team. Not because he’s talented, there’s a lot of talented kids out there, but because he really gets it early in his career.”