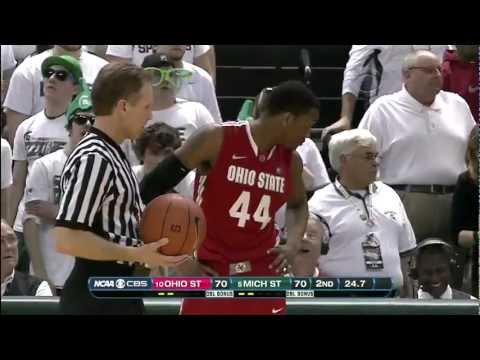 Michigan, Michigan State and Ohio State all finish the season tied at the top of the nation’s best conference. Despite being equal in the win column, the stats say that the Wolverines might have been a bit lucky to earn their share. Michigan was worse on both sides of the ball, outscoring its opponents by less than a third as many points per possession, but simply figured out ways to win. Michigan won more than its fair share of close games, a positive, but also failed to blow out many league opponents.

Despite the lack of polish on the Wolverine resume, Michigan didn’t back into the Big Ten title. Far from it. The Wolverines played the 2nd most difficult league schedule (per Ken Pomeroy), split their games against Ohio State and Michigan State, and finished the season by winning six of their final seven games. The opportunity was there and the Wolverines did all they could to have a chance when all was said in done. If any of the three co-champions had figured out a way to win their final home games, they would have earned the conference title outright. However, all three teams also almost let the title slip away in the final two weeks. Ohio State and Michigan barely escaped Evanston with late wins while Michigan State needed a dramatic comeback to win at Minnesota.

With so many close games this season, perhaps the larger question is what to make of the Wolverines going forward. Conventional wisdom, and statistics, say that Michigan has probably over achieved and is playing with fire, ripe to be picked off in an upset. A more emotionally pitched argument would say that the Wolverines have so much close game experience and understand how to manufacture wins. -Dylan Burkhardt

In a game where the Big Ten title was on the line, this one more than lived up to the hype. Ohio State needed a win in order to garner a share of the Big Ten title. Michigan State already had at least a share locked up, but a win would give them the title outright.  A Buckeye win would give a share of the title to Michigan as well, something Derrick Nix seemed particularly perturbed about:

“We had to share it with our little nephews, and that sucks. So now they’re happy because we lost. We got to just try to win this Big Ten tournament.”

For the first time in history, Wolverine fans were rooting for the scarlet and gray. After trailing by as many as 15 in the first half, the Buckeyes stormed back to take the lead with 9:54 to play following a Deshaun Thomas layup. The two teams battled back and forth the rest of the way, until Ohio State held the ball with 25 seconds to go and the score tied. Out of a timeout, the Buckeyes ran the clock down as low as they could, until the ball was in William Buford’s hands. Buford was dominant in the second half, scoring a game-high 25 points, and buried a contested jumper over Keith Appling with one second to play. After seemingly endless timeouts and clock reviews, Draymond Green’s desperation heave at the buzzer fell short. Ohio State got the win and a three way tie at the top was official. -Kevin Raftery

Win, and Michigan State would be sole Big Ten Champs. Instead, the Spartans laid an egg in Bloomington. Sure, Indiana is a very good team and Assembly Hall is among the best venues not only in the Big Ten, but in the nation.  But Michigan State seemed to be hitting its stride and had won seven straight to propel to the top of the Big Ten standings — with the title on the line, many figured the Spartans could come away with this one. Instead, Michigan State fell into an 18-8 hole early on and never really had a chance. Draymond Green poured in 29 points but no other Spartan had more than eight, and Indiana came away with a very convincing 15-point win over the conference leaders. -Kevin Raftery

26 years — the number of years since Michigan’s last Big Ten title. In 1986, the No. 1 song of the year was Falco’s “Rock Me Amadeus”. Yeah, I’ve never heard of it either. Ferris Bueller’s Day Off was the most popular film of the year. Ronald Reagan was president. None of the players on this year’s team were alive. Bottom line: 1986 was a long, long time ago. Now, 26 years later, Michigan is at the top of the Big Ten. So soak it in and enjoy it Wolverine fans.

Back in the days when Michigan fans still hated Ohio State (as in, every day other than this past Sunday), a Northwestern win over the Buckeyes would really go over well. The Wildcats had their chance for a true quality win that would do wonders for their NCAA tournament chances. After trailing by as many as 13 in the second half, Northwestern climbed all the way back to tie it with seven seconds to go off a clutch 3-pointer by Alex Marcotullio. But on their final possession, the Buckeyes managed to take the ball the length of the court and dump it inside to Jared Sullinger, who made it look easy and banked in a layup off the glass with three ticks left to play. The Wildcats couldn’t get a last-second desperation heave to go, and Ohio State snuck away with the two-point victory in Evanston – preserving the Buckeyes’ Big Ten title hopes. -Kevin Raftery

With Jared Sullinger stapled to the bench with four fouls late in the second half against Michigan State, the Buckeyes were forced to turn to seldom-used forward Evan Ravenel. In eight crucial minutes of play, the 6-foot-8, 260 pound Ravenel not only helped Ohio State stay in the game, but he gave them a burst of energy that they badly needed. In a three-minute time span, Ravenel scored seven straight points for the Buckeyes, helping to turn a three-point deficit into a one-point lead with Sullinger on the bench. Ravenel’s seven points tied for the most he’s scored in a Big Ten game this season, and the points couldn’t have come at a better time for the Buckeyes. Or Michigan, for that matter. -Kevin Raftery

Finally, it’s tourney time. The tournament kicks off with first round play on Thursday. You can see the full 2012 bracket here but the match-ups are: No. 8 Iowa against No. 9 Illinois, No. 5 Indiana against No. 12 Penn State, No. 6 Purdue against No. 11 Nebraska and No. 7 Northwestern against No. 10 Minnesota.

On Friday at 6:30, Michigan will take on the winner of the Minnesota-Northwestern game (5:30 Thursday, ESPN 2). The Wildcats most likely have to win on Thursday in order to keep their tourney hopes alive and could need a win over Michigan to solidify a first-ever NCAA tournament berth. But if Michigan wins Friday, there’s a good chance the Wolverines will have a rematch with one of their co-champions,  the No. 3 seed Ohio State. The top of the bracket features Michigan State and Wisconsin with byes and Indiana as a potential dark horse team playing in their home state. Everything wraps up with a 3:30 championship game on Selection Sunday. With little separation between so many teams in the standings, this year’s tournament has the makings to be one of the best in years. -Kevin Raftery