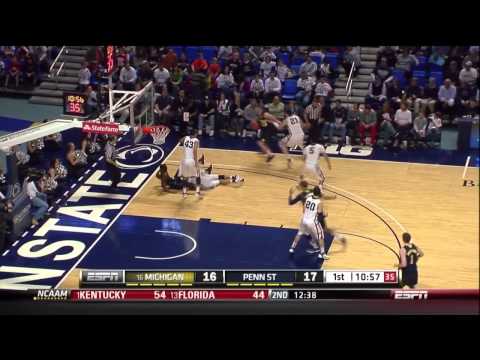 After finishing 4-for-4 from behind the arc on Thursday in Michigan’s 72-61 win at Illinois, Tim Hardaway Jr. picked up right where he left off on Sunday against Penn State. Just 16 seconds into the game, Stu Douglass drove baseline and found Hardaway open for three at the left wing. Hardaway didn’t hesitate and drained the deep ball to give Michigan the early 3-0 lead. Hardaway looked calm and confident. That confidence shone through again around the 11-minute mark of the first half. Off of an Evan Smotrycz missed 3-pointer, Hardaway outhustled two Penn State defenders to corral the offensive board and keep the possession alive. Michigan reset the offense, and not long after, Hardaway had the ball at the top of the key. Jordan Morgan set a screen to give Hardaway just a hint of breathing room. When Hardaway’s on, that’s all he needs. He drained another three, this time with a defender right in his face. The shot lit a fire under the Wolverines, as it was the beginning of a 25-4 run that turned a tight game into an 18-point lead late in the first half. Hardaway’s third first half three pointer was his seventh make in eight attempts and an encouraging sign that the sophomore has turned it around.

2. Penn State’s 7-0 run to end the first half keeps the game within reach

Holding a commanding 39-21 lead with under three minutes to go in the first half, this one looked as though the benches would flood out pretty early in the second half. Michigan was dominating on both sides of floor, while Penn State couldn’t get anything going at all. Fueled by sloppy play by the Wolverines down the stretch, the Nittany Lions rattled off seven unanswered points to head into the break within striking distance, 39-28. Trey Lewis started the run with a jumper from the top of the key with 2:36 to go. He banked it in without calling glass, but Penn State would take a bucket any way they could get it. The bank shot was Penn State’s first made field goal since the 12:19 mark. On the other end, Trey Burke coughed the ball up in the lane, giving the ball right back to the Nittany Lions. Not long after, Tim Frazier was fouled in the lane, and he hit two free throws. Michigan responded with two more turnovers — one on a moving screen by Colton Christian, and another an errant pass after Christian was held on a cut. Following Hardaway’s miscue, Frazier drove hard to the hoop in transition and found Jermaine Marshall open for three in the right corner. Marshall drilled it to cut the deficit to 11 and Penn State had a chance going into the second half.

In non-conference play earlier this year, we saw what Evan Smotrcyz is capable of. He scored 20 points twice and tallied double figures in five out of the last six non-conference games. Smotrycz’s production slowed during the grind of the Big Ten season and he reached double digits just four times, and his highest point total before Sunday was 13 against Illinois. The potential and skill-set is there but Smotrycz hasn’t been able to put it all together in league play on a consistent basis. In the regular season finale, Smotrycz put it all together and had one of his best games of the season. He scored 17 points on 6-of-7 shooting and knocked down three triples on the day. Smotrycz scored in a multitude of ways: in the lane off the pick and roll, off the dribble, off of pump-fakes, from behind the arc and from the free throw line. We’ve said all year that if Smotrycz can get going, Michigan can be a very, very dangerous team come tournament time. Well, it’s tournament time now, and Smotrycz is steadily building momentum.

Just when you thought this one was over again, pesky Penn State went on another run. This time, it was a 13-0 run that cut a 19-point deficit to just six with under six minutes to play. And once again, it was fueled by sloppy Michigan turnovers. In this three-minute time span, the Wolverines turned the ball over four times, and each time, the Nittany Lions made them pay on the other end. The highlight of the run came off a dunk from Jermaine Marshall. With Michigan in a 2-3 zone, Marshall simply took two dribbles left to blow by Trey Burke on the right side of the lane. When that happens, Morgan should step up in the middle to stop the man with the ball, and the opposite side wing, occupied by Matt Vogrich at the time, should sink down to cover the opposite block. Vogrich did sink in to cover the opposite block, but Morgan, clearly timid about picking up his fourth foul, let Marshall drive all the way to the bucket and never even challenged the shot. The dunk not only cut the lead to just ten, but for the first time in the game, the Penn State crowd (which didn’t consist of much) came alive. From there, two more Hardaway turnovers led to points for the Nittany Lions, and suddenly, with 5:46 to go, Michigan’s lead was cut to 56-50, and we had a ball game.

5. Burke, Hardaway hit clutch shots down the stretch to seal the win

Usually, a four-point play could very well be a dagger in a six-point game with under five minutes to go. When Trey Burke converted a four point play the Bryce Jordan Center crowd went quiet and it looked like Michigan was safe. 27 seconds later, Penn State’s Trey – freshman guard Trey Lewis, who Burke faced in the Ohio state semifinals last year – responded with a four point play of his own. Zack Novak fouled out on the shot as he closed out in an out of control fashion and Michigan was still in a dog fight.

With just a four point lead and less that 90 seconds to play, Michigan looked to its freshman point guard again. Off of a pass from Hardaway, Burke sniffed some open space on the baseline. With Trey Lewis on his hip, Burke drove all the way to the hoop and simply outmuscled Lewis, finishing strong on the left side to give Michigan the six-point lead with 1:25 to play. After Penn State responded with a couple of free throws of its own, the lead was back to just four with under a minute to play. This time, Hardaway stepped up and he delivered the dagger. With the ball well outside the three point line on the left wing, Burke ran up from the baseline behind Hardaway. Hardaway faked the handoff to Burke, which made both Penn State defenders flinch to the left, giving Hardaway an open lane to drive. Hardaway took two dribbles left toward the basket and pulled up for the open jumper. He buried it, giving Michigan a 66-60 lead with 41 seconds to go. The hill would finally prove to be too steep to climb for the Nittany Lions, and Michigan came away with a 71-65 victory.

Hours later, this shot from William Buford might have been the most important play of the day: