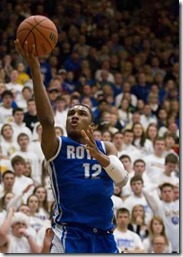 It was a big weekend on the court for Michigan as the Wolverines earned a share of their first Big Ten title since 1986 but it was also a big weekend for several future Wolverines. Here’s a look at how Michigan’s 2012 and 2013 commitments fared in playoff action.

Michigan commitment Nik Stauskas took home the MVP of the championship game and had 19 points, eight rebounds, four assists and three blocks in the win.

Watching Kaleb Tarczewski take on Nerlens Noel was the obvious draw for fans attending this game, which would explain the standing-room only crowd at Endicott for the NEPSAC AA final. Despite the pre-game hype, future Michigan guard Nikolas Stauskas (game MVP) stole the show for St. Mark’s.

Stauskas is renowned across the country for his lights-out shooting and ability to use his explosiveness to get to the rim, all of which he displayed today, but he also made his mark defensively with several key blocks and steals.

Stauskas was understandably elated after the win:

“This is so crazy for us, because after last year’s loss to them, for like, a year exactly to this day, we’ve been thinking about this rematch against Tilton,” said Stauskas, who finished with 19 points and has signed with Michigan for next season. “There’s no better feeling in the world than just working hard and achieving your goals.”

St. Mark’s head coach Dave Lubick provided a solid assessment of Nik’s game and how far his development has come:

“Nik did some amazing things,’’ said Lubick. “He also did some things that are going to give me nightmares, but he came through, he made shots. He’s an unbelievable shooter and that reverse layup just shows how hard he’s worked. Nik’s a gym rat, he just loves the game, and when he comes to play all bets are off.’’

We’ll have more from this game later today including video footage.

Brewster had gone undefeated throughout the talented NEPSAC Class AAA league all season long but was finally knocked off in the league semifinals. Brewster ran into Northfield Mount Hermon and fell in overtime by a final score of 87-83.

McGary had 14 points in the loss. Next up for Brewster is a trip to the National Prep Championship where Brewster, the #1 seed, will face Massanutten Military Academy on Tuesday at Albertus Magnus College in New Haven, CT.

The full game is available on YouTube, and here’s the first of three clips:

The second and third clips are linked here

Prep Stars TV posted some rehashed highlights of McGary from this summer at the Under Armour Summer Jam:

Robinson had 24 points in a 63-37 win over Highland to win the Class 4A West Side Sectional. It was Lake Central’s first sectional crown since 1997 and first ever since Indiana shifted to class basketball. The Indians are 21-2 on the season and Robinson’s teammate, 2014 Michigan target Tyler Wideman, added 18 points in the win.

After a heartbreaking defeat in last year’s sectional, Robinson reminisced in the post game:

“It’s just a great feeling,” Robinson said. “My freshman year, I could never imagine anything like this. Cutting down the (net), you get up there and everybody’s screaming for you. It’s a crazy environment and I’m just blessed and happy to be a part of it.”

“They (Robinson and Wideman) are the type of players who make the extra pass, they make good decisions on the floor,” Indians coach Dave Milausnic said. “This feels great for the school and especially for the fans. We have such loyal fans and they have hung with us. I’m really happy for them.”

Zak Irvin and Hamilton Southeastern knocked off by Carmel

Gary Harris and Zak Irvin’s Hamilton Southeastern team was among one of the favorites for in the Indiana state title race, especially after a sectional opening win over North Central. That run came to an abrupt end on Saturday as Carmel shocked the Royals and upset them in the sectional final. Irvin had 23 points and 13 rebounds in the loss.

Anthony Wayne’s 39-30 sectional final win over Perrysburg might not be glamorous, the score was 3-2 after the first quarter, on the stat sheet but it was another big step forward for the program. Donnal had a team high 10 points in the win.