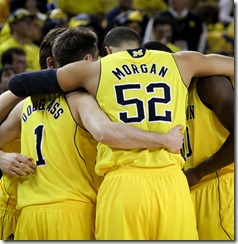 Selection Sunday is tomorrow and bracket projections are far from solidified. Conference tournaments and major upsets continue while the bracketing picture seems to get cloudier by the hour rather than sharpening.

There’s been plenty of action are the 3-4 seed lines in the last two days. Michigan escaped against Minnesota. Wisconsin beat Indiana. Georgetown and Marquette dropped Big East tournament games. Baylor beat Kansas. The question that everyone wants to know: what does it all mean for Michigan tomorrow evening? Where do the experts have Michigan seeded in the latest brackets and where are the Wolverines slated to travel?

In short, Michigan is a solid 3 seed. Anything can happen but it appears the Wolverines will avoid being sent west in the opening rounds and are most likely to end up in the East (Boston) or South (Atlanta) regionals.

Michigan State, Ohio State, Michigan, Wisconsin and Indiana are all top 15 teams and fighting for a protected NCAA tournament seed. With all five teams so narrowly differentiated, someone is going to slip and end up with a disappointing seed and region combination. Michigan State and Ohio State are a cut above but Michigan, who is probably a hair above Wisconsin and Indiana. However, the later three are all projected as a three seed in at least one recent bracket projection and could be in for an interesting Sunday.

Indiana didn’t do itself any favors by losing to Wisconsin on Friday, but the Hoosiers still have four top 10 RPI wins and a resume that speaks for itself. Does Wisconsin jump Indiana and stay in a Midwestern pod, shipping Indiana west to Portland or Albuquerque? Or does Indiana hold on and stay close to home?

Most bracketologists have Michigan in Louisville, a manageable site for the Wolverines, but there’s still a chance that another win or two in the Big Ten Tournament could pull Michigan even closer to home – perhaps a Columbus pod with Michigan State – to open the Big Dance next weekend.

Baylor Beats Kansas: No. 1 Seed on the Table?

Baylor upset Kansas in the Big 12 tournament semifinals which solidifies Baylor as a No. 3 seed (likely headed to Albuquerque) but also leaves at least a sliver of hope for Michigan State or Ohio State to lay claim on a No. 1 seed. Would a Big Ten Tournament victory for either of Michigan’s rivals be enough to earn a No. 1 seed? Jerry Palm thinks so and has the Buckeyes projected as a  No. 1 seed in his latest bracket. If anything it should provide at least a little more motivation for both the Spartans and Buckeyes on semifinal Saturday in Indianapolis.