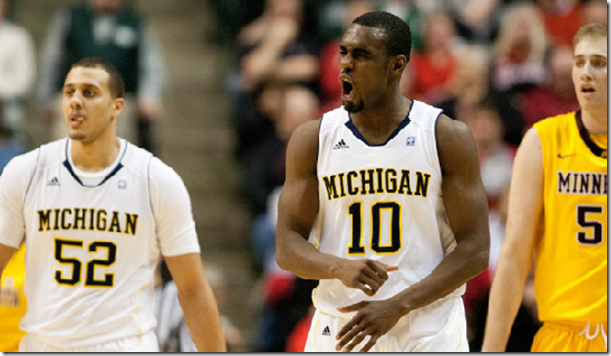 Over 30 games into the season, statistics do a pretty good job of illustrating what a team is all about. The statistics say that Michigan is a good team, one that struggles to rebound the ball but shoots it pretty well and wins the turnover battle more often than not. The numbers also say that Michigan isn’t nearly as good as its co-Big Ten champions Michigan State and Ohio State. Math defines Michigan’s record and shared championship as something of an anomaly, statistical luck, and promises that the Wolverines will regress toward the mean with an inevitable upset loss. The mathematical reasoning is sound but games like this serve as a reminder that the difference between “lucky” and “unlucky” basketball teams has nothing to do with actual luck. Good teams find ways to win games even when they probably shouldn’t and that’s exactly what Michigan did yet again against Minnesota.

Michigan isn’t going to overpower many teams. Blowouts on Michigan’s schedule have been few and far between and at times it seems that the Wolverines go to great lengths to make things more difficult on themselves. Against Minnesota, Michigan dug itself a hole then opted to dig even deeper before supplying a last ditch comeback effort.

This was another game that Michigan had no business winning. For 36 minutes, Minnesota outplayed the Wolverines. The Gophers shot the ball well – 50% on twos and 39% on threes – and dominated the offensive glass, rebounding an astounding 47% of their misses. Gopher turnovers and fouls allowed Michigan to hang around just long enough for a last ditch barrage of triples. Michigan’s shooting numbers were strong for the game but that’s because of a torrid closing stretch. The Wolverines made six of their final nine field goal attempts and five of their eight made threes came in the final four minutes or in overtime.

With under five minutes to play, Rodney Williams stretched Minnesota’s lead to nine points with a thunderous dunk. The dunk united Minnesota fans with the Ohio State and Purdue faithful who had filed into their seats in preparation for the session’s nightcap. The Wolverines were on the ropes but managed to delay what seemed inevitable with a mini 5-0 run.

Now down just four points, the next seven possessions should have deflated all Wolverine momentum. Michigan’s defense provided three consecutive stops but the offense gave away every opportunity on the other end. First Stu Douglass misfired on a hurried pull-up jumper. Then Tim Hardaway Jr. forced a driving attempt in transition before missing the front end of a one-and-one. If Michigan’s comeback hopes seemed long with five minutes to play, Joe Colemans layup to extend the Gopher lead to six points with 92 seconds appeared to be the death blow.

The Wolverines continued to shoot themselves in the foot but always seemed to have just one more opportunity. It was only fitting that Michigan’s final two baskets were products of offensive rebounds. Both late threes, from Zack Novak and Evan Smotrycz, were made possible by Jordan Morgan corralling Michigan misses and providing another opportunity. Michigan closed the game on an 11-2 run and opened overtime with a 7-1 spurt, and the combined 18-3 run was enough to sink Minnesota.

Make no mistake about it, Michigan played one of its worst games of the season for the first 35 minutes. If Michigan plays that poorly next week, its season will be over. However, the resolve that Michigan displayed once again with its back to the wall will be invaluable in the NCAA tournament. The Wolverines might run into a better team or a hotter team, but there’s no doubt they’ll fight until their bitter end.