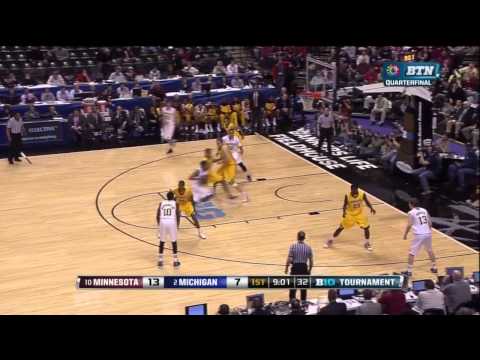 In the first half on Friday, Michigan simply came out flat. The Wolverines couldn’t get anything going offensively, lost out on 50-50 balls and finished the half with just 20 points. Without Trey Burke, it could’ve been a lot worse. The freshman tallied 13 of Michigan’s first half points and kept them in a game that felt like the Wolverines should be down by double digits. With Michigan down 9-1 over six minutes into the game, Burke demonstrated the variety of ways that he can score the ball 11 straight Michigan points. The run started with an easy fast-break lay in off a nice pass from Tim Hardaway Jr. Moments later, Burke pulled up with one of his go to moves — a little shake and bake at the top of the key followed by a three pointer off the dribble. Technically, he didn’t drill this one; it bounced on the rim five times before somehow dropping, but three points is three points. Burke then got going with the dribble, driving straight through a couple of Minnesota defenders for a strong layup. To cap the 11-0 run off, Burke hit another three, this time off a dish from Jordan Morgan, who found Burke open after Burke’s defender sunk in to help on Morgan. Later in the half, Burke would provide another deep jumper and he finished the half 5-of-7 from the field and 2-of-2 from behind the arc for 13 points. No other Michigan player had more than three at the break and without Burke, Michigan’s chances of winning this game would have been slim to none.

While Burke was the hero for Michigan in the first half, Tim Hardaway Jr. came out of the break determined to prove he could put the team on his back as well. After scoring just two points on three field goal attempts in the first 20 minutes, Hardaway poured in nine straight in just two minutes and 24 seconds to start the second half.

Hardaway started in the post as he curled into the paint with purpose and caught the ball on the opposite block. With just one defender on his back, Hardaway went to work. He took two dribbles into the lane, rose up for a short jumper and drew the foul. The play didn’t seem to significant at the time, but for any shooter — especially Hardaway, who has struggled with the mental aspect of the game — anything positive to get the confidence going is important. He hit the two free throws and transformed into a different player. On the next possession, coming off a screen from Zack Novak, Hardaway received the ball on the right side of the wing and rose up immediately for a 3-pointer, with no hesitation. He nailed it. Then Hardaway went back inside, driving with his right and finishing a difficult floater in the teeth of the Minnesota defense to give Michigan its first lead of the game. Hardaway closed the run with yet another difficult jumper, this time from just inside the 3-point line at the top of the key.

Most importantly, Hardaway looked confident and was getting the ball in position to be effective. He was curling hard into the lane, catching the ball on the block and using ball screens as comfortably as we’ve seen since last season.

With under six minutes go, Minnesota led by one. The second half had been a back-and-forth battle and this game, like the match-up in Ann Arbor, had the feeling of a game that would be won in the closing seconds. But in a span of just one minute, the Golden Gophers turned that one point lead into a nine-point lead, and every fan not wearing maize and blue in the Bankers Life Fieldhouse — especially Ohio State and Michigan State fans — was on his feet cheering for Minnesota. Julian Welch started the run with a 3-pointer from the right wing. On Michigan’s next possession, Burke coughed it up in the lane, and just seconds later, Welch hit another deep ball to increase the lead to seven. Then came what, for many teams, would have been the dagger. Off of a Jordan Morgan miss, Minnesota took off on a 3-on-2 fast break. Leading the break, Andre Hollins passed the ball to the dashing Rodney Williams. With a helpless Hardaway under the bucket, Williams jumped through the roof and threw down a powerful Sports Center top 10 worthy jam to the delight of every basketball fan in America other than those in maize and blue. The arena went nuts and with 4:38 to go, Michigan was in desperation mode.

If there’s one thing every Michigan fan has learned about this team this year, it’s that it doesn’t quit. With the odds and most of the stadium against them, the Wolverines certainly didn’t quit against the Gophers. Following Minnesota’s 8-0 run, Michigan would have to put together a run of its own in order to have a chance, and it did. It started with, who else? Trey Burke. Off a ball screen from Morgan, Burke weaved through two defenders and then finished a very difficult layup with Julian Welch right in his face. On Minnesota’s next offensive possession, Burke stripped the ball from Andre Hollins, dove for the ball and wisely called timeout before getting called for a travel or allowing a Minnesota player to force a jump ball. Out of the timeout, Burke found Novak open on the left wing for three. Up to that point, Novak had been a non-factor and was held scoreless. But in the closing minutes, Novak stepped up exactly like a senior should. He hit the three to cut the lead to four. Two minutes later after an infuriating sequence where three Michigan stops were followed by empty possessions, Novak hit another three. Jordan Morgan rebounded a missed three by Burke, kicked it out to Stu Douglass who made the extra pass to Novak in the corner. The deep ball made it a one-possession game with 1:14 to go, and the Wolverines had defied the odds and were within striking distance.

Jordan Morgan had a relatively quiet night against the Gophers but he had two subtle but important plays for Michigan, and both came in the form of offensive rebounds. The first led to Novak’s three in the previous play, the second was on Michigan’s next offensive possession. With 24 seconds to go, Novak fired up an off-balance 3-pointer from the top of the key. The shot was way off and didn’t even hit the rim, but rather than looking at the rim waiting for the ball as the Minnesota defenders did, Morgan followed the shot with his eyes and was in perfect position to come down with the rebound following the air ball. Morgan nabbed the rebound to keep the possession alive. Minnesota knocked the ball out of bounds, which actually turned out to be a good thing for Michigan—it allowed Beilein to sub in Smotrycz for Morgan without burning a timeout. Out of the inbound play,  Douglass received the ball under the hoop and instead of attempting a difficult layup, he wisely took a couple dribbles and found Smotrycz wide open on the right wing. Smotrycz had only attempted three shots all day and had come up empty on all of them. But there was never a doubt on this one. Smotrycz drilled it to tie the game up with 19 ticks to go. Minnesota still had plenty of time to win it but couldn’t get it done in the closing seconds – this one was headed to overtime.

Like Novak, Stu Douglass had been quiet offensively all night. Heading into overtime, Douglass was scoreless and had attempted just three shots. Also like Novak, Douglass picked a good time to get hot. With the score still tied over a minute into overtime, Hardaway found Douglass open in the left corner for three following a scramble for the ball in the key. Douglass hit it as if he had been raining threes all night to give Michigan the important early overtime lead. After Minnesota hit a free throw, Burke got back into the action. Once again, he went to his sweet spot, the top of the key. Off a ball screen from Morgan, Burke pulled up and drained a deep ball, his third of the game, to increase Michigan’s lead to five. On Michigan’s next possession, the Wolverines bled the shot clock all the way down. Burke nearly turned it over but the ball fell into the hands of Douglass. With the ball on the right wing, Douglass was forced to make something happen. He drove into the lane, attracting three defenders and pulled up with a difficult jumper from the right elbow. The shot fell as the shot clock expired and Michigan’s overtime lead was up to seven points. Minnesota would make another run but the quick start, combined with clutch free throw shooting, was enough to carry Michigan to the semifinals.