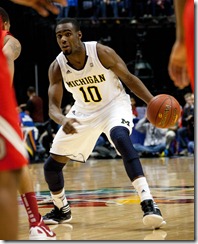 Selection Sunday is here and for the first time since 1998 Michigan will be able to watch the announcement show without worry. There’s no bubble talk or nervous trepidation, Michigan is firmly in the field of 68 and should receive its best NCAA tournament seed since the 90s.

The only question that Michigan coaches, fans and players want answered: where are we going and who are we playing?

Most projections still have Michigan on the 3-seed line and the Wolverines could be in line to play close to home next week.

Nothing is ever guaranteed when you are predicting how a seemingly random group of athletic department administrators will analyze college basketball teams. However, there are a number of people who study this year in and year out and they are convinced – almost at consensus – that Michigan fits the bill for a 3-seed.

The most likely locations for Michigan to open tournament play continue to be Louisville or Columbus with perhaps an outside shot at Nashville or Pittsburgh. While it remains possible, it would be a surprising disappointment for Michigan to be sent west to either Albuquerque or Portland. All four of the most likely venues could provide ample opportunity for a strong turnout of Michigan supporters.

As for opening opponents, Belmont and New Mexico State are among the most likely No. 14 seeds to see next to Michigan’s name on the bracket. Both are uptempo and experienced teams that enter the NCAA tournament after winning their respective league tournaments that could provide difficult tests.

This is just a snap shot of the most likely scenarios at this juncture. Last year most bracketologists had Michigan projected as a 10 or 11 seed before the Wolverines were handed an 8-seed. In a couple hours the speculation is over and the Wolverines will move forward to prepare for their next foe.