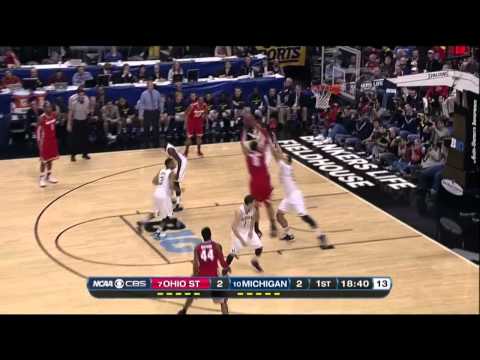 In Michigan’s 56-51 win over Ohio State on Feb. 18th, the Wolverines held Jared Sullinger to just 14 points and frustrated him with double and triple teams all night. On Saturday, it was pretty clear that Sullinger was out for revenge. Sullinger started the game on fire, scoring eight of the Buckeyes’ first ten points. He scored easy baskets by establishing position and made difficult shots when necessary. He scored at will throughout the game whether it was by hitting 15-footers or showing off a his vast array of post moves. If Michigan was going to have a chance on Saturday the Wolverines once again needed to find a way to slow Sullinger. They couldn’t do that, and as a result, were never competitive.

After Ohio State jumped out to an early 12-3 lead five minutes into the game, Michigan needed to find a way to stop the bleeding and keep the deficit within reach early. With 14:40 to go, the Wolverines had a golden opportunity to do just that and sway a little momentum back in favor of Michigan. With the ball on the left wing, Burke drove left in the lane. Sullinger stepped up to help, leaving Jordan Morgan alone under the basket. Burke bounced the ball to Morgan, who rose up for the jam. But Morgan misplayed it, and the ball clanked off the back of the rim and into the hands of Sullinger. Opportunity squandered. Less than 20 seconds later, Michigan had another great opportunity to steal some momentum back. On a 3-on-2 fast break, Burke drove right at Aaron Craft and laid the ball in on the right side, drawing hard contact from Craft. The whistle blew, but instead of calling what appeared to be an And-1 for Burke, the referee whistled Burke for the charge. Another opportunity squandered. Had Morgan and Burke both converted on their chances, Michigan could have cut the lead to four. Instead, the Buckeyes held on to their early lead and the momentum.

3. Turnovers kill any chance of a Michigan comeback

Trey Burke’s turnover numbers this season have been remarkably small for a freshman point guard. He’s turning the ball over on 18% of Michigan’s possessions that he uses, or 2.8 turnovers per game. Those are very solid numbers for a player with the ball in his hands as much as Burke. In four minutes on Saturday, Burke doubled his per game average with five turnovers. Ohio State, notably Aaron Craft and Jared Sullinger, did a great job of defending Burke and he never looked himself. The first play in this set sums up Burke’s night perfectly. On the fast break, Burke drove at Craft on the left side, dribbled with his right hand then crossed over to his left, and Craft went for the steal. Noticing this, Burke went behind his back with the ball, leaving Craft in the dust and a clear look at a layup. But instead of just laying it in for an easy two, Burke lost the handle of the ball and it went out of bounds, giving the ball back to the Buckeyes. On Ohio State’s next possession, Burke stripped Craft and was off to the races again. But once again, he couldn’t convert on the offensive end. It was just that type of night for Michigan’s leader.

4. Novak’s three cuts deficit to 16 but Michigan fails to get closer

With Michigan’s ability to shoot the three, there’s always a slight possibility that the Wolverines could storm back from any deficit – something we saw on Friday. With about 12 minutes to play and a 19 point defecit, Michigan’s comeback chances looked grim but there was enough time to make things interesting. Zack Novak hit a three to cut the deficit to 16 and it was a small ray of hope that maybe the Wolverines could get something going. Of course that would require Michigan to get stops on the other ond. They couldn’t. The Buckeyes responded right away with a three pointer by Deshaun Thomas. Then, with under nine minutes to play and the lead back up to 18 points, Evan Ravenel delivered the exclamation point for the Buckeyes with a rim-rattling alley-oop slam. There was still plenty of time on the clock, but this game was over.

5. Corey Person, Josh Bartelstein make the most of late minutes

It’s not often that the end of Michigan’s bench gets to see much action on the court. John Beilein is very careful about emptying his bench late in games in victories. But on Saturday, faced with a 27-point deficit late, Beilein threw up the white flag. Michigan’s seldom used bench players made the best of it. Senior Corey Person scored a career-high seven points, including an and-1 with 41 seconds to go. Josh Bartelstein also hit a bucket for the first time this year off an assist from Carlton Brundidge. It was a brutal game overall, but the bench players at least gave the Wolverines something to cheer about before the buzzer finally sounded.