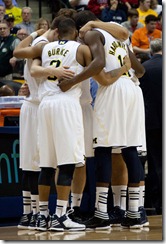 Michigan will open the NCAA tournament with a round of 64 matchup against Ohio University on Friday, March 16th at 7:20 p.m. ET in Nashville, Tenn. at Bridgestone Arena on TNT.

The Wolverines were nabbed as the No. 4 seed in the Midwest regional. The Michigan-Ohio winner will face the winner of Temple versus California or South Florida in the round of 32.

Ohio is rated the No. 72 team in the country by KenPom.com and finished third in the MAC East divsion before winning the MAC Tournament. Game times and television information are expected to be announced later tonight. Tickets are available here.

John Beilein has coached in the NCAA tournament seven times and this is his third tournament appearance in five seasons at Michigan. Beilein is 8-6 in NCAA tournament games including a Sweet 16 and Elite Eight appearance at West Virginia. Michigan has won its last two NCAA tournament openers, against Clemson and Tennessee, but has fallen in the round of 32 to Oklahoma and Duke.

The Midwest Regional semifinals and finals are in St. Louis. The No. 1 seed in the region is North Carolina and the No. 2 seed is Kansas.