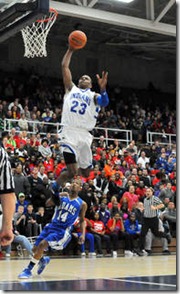 Lost in the Big Ten Tournament action in Indianapolis was the fact that it was a big weekend for several future Wolverines as well. Derrick Walton, Glenn Robinson III and Mark Donnal all played important playoff games over the weekend. Here’s how the trio of future Wolverines fared.

It was a chaotic day on Saturday in the Indiana state playoffs and Lake Central fell victim to the upset bug. Lake Central led by as many as 10 points in the third quarter but fell victim to South Bend Adams’ full court press down the stretch. Adams knocked off Lake Central by a final score of 76-72 and ended Glenn Robinson III’s high school career.

Robinson had 29 points in the loss but missed a pair of free throws in the final minute while Lake Central was trailing by one. Lake Central was 18-of-33 at the charity stripe for the game. Here’s Robinson’s coach, Dave Milausnic, on Robinson’s game and career:

“The numbers are the numbers,” Milausnic said. “The last quarter is no reflection on (Robinson’s) career. He’s been an unbelievable player. He’s one of the best players in the state. Everybody’s awfully proud of him.” (Photo: Sun Trib)

Donnal and Anthony Wayne won ugly on Thursday night in Ohio district semifinal action against Findlay, prevailing by a final score of 37-28. Donnal battled early foul trouble and finished with eight points in the win.

On Saturday, Anthony Wayne fell to the Norwalk Truckers (23-0) by a final score of 52-38. Donnal had 10 points and seven rebounds in the loss.