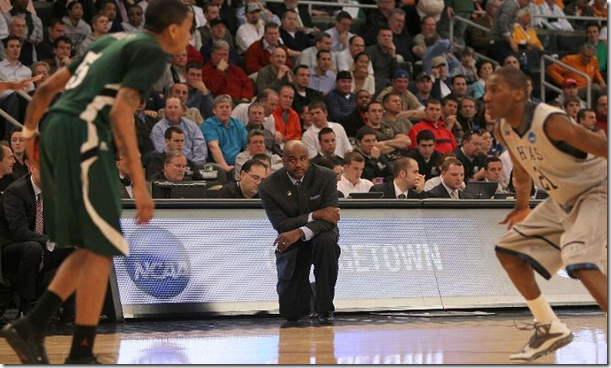 Michigan is back in the NCAA tournament and will open play as a No. 4 seed against No. 13 seeded Ohio on Friday at 7:20 p.m. in Nashville, Tenn. Here’s a first look at Ohio along with a run down of notes, reactions and more in regards to Friday’s game.

Michigan and Ohio will tip off on Friday at 7:20 p.m. ET and the game will be televised on TNT. Ian Eagle, Jim Spanarkel and Lewis Johnson will handled the broadcast at the Nashville regional. For those traveling to or living around Nashville, the Wolverines will have open practice on Thursday from 4:25 to 5:05 pm at Bridgestone Arena and the event is open to the public.

Michigan’s pod lacks any true local or national powerhouse headliners. Ohio’s campus is 324 miles from campus while Cincinnati is 230 miles away from Nashville. Michigan fans will be forced to travel 459 miles to Nashville while Temple, California, South Florida, Texas, Florida St. and St. Bonaventure aren’t particularly close. The wide range of geographic locations should create a unique environment at Bridgestone Arena.

Tickets shouldn’t be hard to come by – in fact they are still available to the general public (Michigan plays in the second session on Friday). I would expect a solid turnout of Michigan fans but Ohio could pick up supporters from the Cincinnati fan-base as well.

Ohio in a Nutshell

The Bobcat team isn’t one to sleep on. Sitting at 27-7 (11-5 MAC), Ohio enters the tournament after winning nine of its last ten games including a pair of wins over the MAC East regular season champions, Akron. The Bobcats are ranked 73rd by Ken Pomeroy and only one of the their seven losses has been by more than seven points. The loss to Eastern Michigan might stand out as a black eye to residents of Washtenaw County but there are a number of solid wins on the resume including Marshall, Oakland and Akron. The Bobcats also lost by just five points at Louisville in a game that they were winning at one point in the final five minutes.

Ohio’s success stems from the defensive side of the ball. The Bobcats tout the MAC’s best defense, holding conference foes to just .93 points per possession, and force turnovers more often than every Division I team but VCU. That aggressive style of play comes at a cost as Ohio sends opponents to the free throw line as often as any team that Michigan will face this season – not quite Indiana circa 2011, but close enough. Dealing with – and exploiting – Ohio’s pressure defense will be the number one priority for the Michigan offense.

Offensively, Ohio is more middling. With just the seventh best (out of 12) offense in the MAC, Ohio’s offense is rated 114th overall by Ken Pom. The Bobcats struggle to shoot the ball inside (46.6% in MAC games) but are even less efficient outside the arc where they hit on a league worst 31% of their three point attempts. Ohio’s aggressive nature offensively helps alleviate the poor shooting concerns. The Bobcats attack the basket and do an incredible job of getting to the free throw line often while avoiding turnovers.

DJ Cooper uses nearly 29% of Ohio’s offensive possessions but defenses are much better off if he’s left trying to create for himself rather than others. Cooper hands out assists more often than any player that Michigan has seen this year besides Penn State’s Tim Frazier but he’s shooting just 39% (78-200) on twos and 31% (69-222) on threes. Of course the primary reason that Ohio is in the tournament is because Cooper hit 12 of 27 (44%) three point attempts in three MAC tournament games last week. If Cooper is hitting shots at a high level he goes from great set-up man to game changer.

Ohio is not a very big team, Reggie Keely anchors the middle at 6-foot-8 263 pounds, and is fairly average on both backboards. Opponents have also had a horrendous time shooting the three point shot against Ohio but that’s a statistic that Ken Pomeroy continues to preach is more random than free throw defense.

A Word on Seeding

Many expected the Wolverines to be slotted as a No. 3 seed when the brackets were released and the committee’s publicly released data revealed that they just missed that slot. Michigan was officially slotted in the No. 13 spot on the S-curve and was regarded as the top No. 4 seed on the board. Michigan was certainly protected more than other four seeds as Indiana and Louisville were both shipped to Portland and Wisconsin will play in Albuquerque. The Wolverines missed out on Columbus, Louisville or Pittsburgh but playing Ohio in Columbus could be a recipe for disaster and Nashville is far from a bad first round location.

The common question is whether Michigan’s lackluster performance against Ohio State cost Michigan a seed line. It’s safe to say that it certainly didn’t help. Had Michigan knocked off Ohio State, there’s no doubt that a spot on the No. 3 line was waiting for the Wolverines. However, the dagger was probably Florida State (No. 12 on the NCAA’s official list) beating North Carolina on Sunday morning. Florida State passed Michigan on the S-curve, Michigan didn’t fall below Florida State.

In the end the question is what does it all matter? First, Michigan plays Ohio instead of Belmont and plays its opening game in Nashville rather than having the opportunity to play in Columbus. Belmont is a very good team with a great statistical profile and a matchup that doesn’t appear any easier than Michigan’s game against Ohio. Beyond that, the Wolverines will face either Temple, South Florida or California if they advance while Georgetown will catch San Diego State or North Carolina State. In short, the roads to the Sweet 16 don’t appear to be significantly different in any easy-to-predict fashion. That leaves the biggest difference a potential Sweet 16 matchup in St. Louis against North Carolina rather than Kansas. North Carolina is the better team but it’s going to take a rather extraordinary effort to beat either team, especially in St. Louis at a venue that will be full of Jayhawk faithful

Ohio is no stranger to the Big Dance. It was just two years ago that the Bobcats upset No. 3 seeded Georgetown in the opening round by a final score of 97-83. Three starters on this year’s team, DJ Cooper, Reggie Keely and Ivo Baltic, played in that game and Cooper scored 23 points on 8-of-12 shooting and handed out eight assists in the upset. Here are the highlights of Ohio’s upset win that was fueled by Cooper and Indiana transfer Armon Bassett.

Michigan obviously has NCAA tournament experience as well but Ohio will certainly not be wowed by the big stage. The Bobcats have been to the tournament and enter the game on the heels of their best stretch of basketball this season.

Consistently making the NCAA tournament and succeeding is the recipe for any mid-major coach to rise up the ladder. John Groce is a rising star in the coaching profession for just that reason and one that many hypothesize could be in line for a high major job – perhaps in the Big Ten? – sooner than later. This is the second NCAA tournament appearance in four years for Groce at Ohio and the Bobcats won a game the last time they were in the dance.

Groce should have no problem re-familiarizing himself with John Beilein as the duo have plenty of history. Groce was an assistant under Ohio State head coach Thad Matta at Xavier while Beilein was still the head coach at Richmond. Groce was also an assistant coach at Ohio State during Beilein’s first season at Michigan. Richmond, Xavier, Michigan, Ohio State, Thad Matta, John Beilein. There was certainly no love lost between the Richmond and Xavier programs and coaches and these rivalries have been extended by Michigan-Ohio State, the continuation of Beilein-Matta and of course Michigan’s gentle ribbing of the term ‘Ohio’.  Groce isn’t a fan of Beilein’s usage of the word:

“My deal is that’s a spat between Ohio State and Michigan,” he said. “The thing that gets lost in the deal is we’re Ohio University. We’re Ohio. We liked to be referred to as Ohio. That’s who WE are.

“I don’t think it’s anything (disrespectful) to us. It is what it is,” Groce continued. “Buy you can’t control it, so I don’t get caught up in all that.”

Bacari Alexander also has ties to Ohio as he was an assistant coach in Athens from 2007 through 2008 before heading to Western Michigan.

Stevie Taylor’s got it: