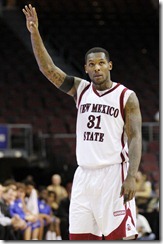 With Northwestern left on the outside looking in on Selection Sunday, the Big Ten will have six teams in the Big Dance. It’s not an eye-popping number, but when you consider that five of those six teams are a four seed or higher, it speaks volumes about the quality of the conference. With a win over Ohio State in the Big Ten Championship game Sunday, Michigan State garnered the one seed in the West Region, while the Buckeyes came away with a two seed in the East. Wisconsin, Indiana and Michigan were all handed out four seeds by the committee and Purdue rounded out the mix with a 10 seed in the Midwest. After the jump, find out who and where each team will play, along with predictions and a preview of each matchup.

The Blackbirds are coming off their second straight Northeast Conference championship and boast the nation’s second-longest home winning streak with 27 straight wins. Unfortunately NCAA tournament games are not played at the Wellness, Recreation and Athletic Center in Brooklyn. The one thing you are sure to see on Friday? Transition offense. The Blackbirds are the second fastest offense in the country, averaging over 74 possessions per game. The fun and gun will be a different style of opponent than Michigan State ever sees in the Big Ten, where games average under 63 possessions per game, and Long Island has the uncanny ability to win the free throw battle – ranking second nationally in both free throw rate (FTA/FGA) and free throw rate allowed. Despite their unique make-up, this is still a 1 versus 16 match-up and no 16 seed has ever knocked off a No. 1 seed in NCAA tournament action. The Spartans have bigger goals in mind and will face a more stringent test against either St. Louis or Memphis on Sunday. KenPom: Michigan State 91, Long Island 66 UM Hoops Pick: Michigan State

Loyola Maryland, winner of the Metro Atlantic Athletic Conference, will be making its second-ever NCAA appearance in school history after defeating Fairfield 48-44 in the conference championship. The Buckeyes, coming off of a grueling 68-64 loss to Michigan State in the Big Ten tournament final on Sunday, have limited time to rest up from the Big Ten tournament to prepare for the Big Dance, but they should have no problem against a Loyola Maryland team that just doesn’t have the talent to keep up. KenPom: Ohio State 75, Loyola 57 UM Hoops Pick: Ohio State

New Mexico State is just 1-6 against Top-100 teams, and 1-3 against NCAA tournament teams, but the Aggies have upset potential and love to push the tempo. Wendell McKines averages a double double at 18.5 points and 10.7 rebounds per game and will pose a dynamic challenge against Christian Watford.The Aggies also crash the offensive glass, rebounding 41% of their misses, and get to the free throw line as often as any team in the country. Indiana has no problem playing up-tempo and this one has all of the makings of a shootout out west. KenPom: Indiana 82, New Mexico St. 73 UM Hoops Pick: Indiana

Montana, winner of the Big Sky Conference, will be making its fifth trip to the NCAA Tournament in the last 11 years. The Grizzlies are currently riding a 14-game win streak, tied for the longest current streak in the country with Belmont. If the old adage that the hottest teams are the most dangerous teams holds true, Wisconsin could be in trouble. Montana doesn’t play nearly as slowly as Wisconsin but the Grizzlies do have a strong interior defense and do a great job of preventing opponents from attempting threes. This game should be physical and Wisconsin is a vulnerable upset candidate if the three point shot isn’t falling. Wisconsin’s tournament success has been criticized in the past but the Badgers can win this game. KenPom: Wisconsin 61, Montana 51 UM Hoops Pick: Wisconsin

Ohio University will be making its second NCAA appearance in three years and 13th appearance overall, just seven years ago Ohio played in Nashville, losing to No. 4 seed Florida by five. The Bobcats’ 27 wins this season are most in school history and one of Ohio’s greatest strengths is its ability to force turnovers. The Bobcats rank second nationally in forced turnover percentage and and fourth in steal rate. The MAC Champs will be a strong test for Michigan, especially with recent NCAA experience but seniors Zack Novak and Stu Douglass should have Michigan ready to go. KenPom: Michigan 66, Ohio 61 UM Hoops Pick: Michigan

St. Mary’s has emerged as a WCC powerhouse and won both the WCC regular season and conference tournament this year, a major step up against their rivals Gonzaga. The Gaels made the Sweet 16 in 2010  and should pose an interesting challenge for Purdue. St. Mary’s runs an efficient and difficult to guard offense which ranks in the top 25 nationally by Ken Pomeroy. Purdue’s offense has the firepower to keep up with St. Mary’s but after surrendering 1.09 points per possession in conference play the defense has to be a concern. The Boilermakers have won their past 13 round of 64 games but every run has to come to an end at some point. KenPom: Purdue 72, St. Mary’s 69 UM Hoops Pick: St. Mary’s