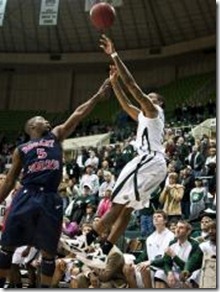 For the first time since the 1990s, Michigan will be favored in an NCAA tournament game as the Wolverines face off against 13th-seeded Ohio in Nashville, Tenn. The Wolverines, who haven’t lost consecutive games this season, enter the game on the heels of a demoralizing loss to Ohio State and have been the subject of upset talk since tournament pairings were announced on Sunday. Michigan players won’t come out and say it directly but it’s clear that, despite sharing the regular season Big Ten title, this team enters the NCAA tournament with a chip on its shoulder and a point to prove.

Ohio comes to Nashville after winning eight of its last nine games, including three games in three days to win the MAC Championship in Cleveland. The Bobcats are 27-7 overall but just one of their 34 games this season has been against a team in Ken Pomeroy’s top 50. The majority of Ohio’s losses, including that top-50 loss at Louisville, have been competitive down the wire and the Bobcats certainly appear to be peaking down the stretch.

Ohio’s strengths lie on the defensive end of the floor. The Bobcats rank 45th in Ken Pomeroy’s adjusted defensive efficiency ratings which is three slots higher than Michigan’s defense measures out this season. The Bobcats’ defensive success is almost entirely predicated on forcing turnovers. Ohio forces opponents to give the ball away on nearly 27% of their offensive possessions, the second best defensive turnover rate in Division I. Unlike Michigan, who does a good job of forcing turnovers without unusually high steal numbers, Ohio has the fourth highest steal rate in the country. The forced turnovers and aggressive style of play come at a price as Ohio’s defense surrenders a free throw rate (FTA/FGA) of 44%.

The Bobcat offense lags behind the defense in effectiveness. Ohio’s offense ranks outside of the top 100 in Ken Pomeroy’s adjusted offensive efficiency and the Bobcat offense was just the seventh best in the MAC. Six of Ohio’s seven losses were in one of the 11 games where the Bobcats failed to surpass one point per-possession and their bugaboo has been shooting. The Bobcats were the worst three point shooting team in the MAC this season, connecting on just 31% of their long range efforts, and weren’t much better inside where they hit 47% of their twos. Ohio doesn’t have other glaring flaws on the offensive side of the ball but the Bobcats aren’t dominant in any one area to overcome a subpar shooting night.

The Bobcats appear to play their best basketball when their defense forces turnovers leading to easy offense. Ohio averages a shade over 18 points per game off of turnovers and the ability to create offense out of defense is a dangerous trait for an underdog, one that can cause dramatic runs throughout a game. Michigan’s offense has done a great job of valuing the basketball since John Beilein arrived and it is generally designed to exploit defenses that overpressure by spreading the floor and using the back cut. This is a battle of strength on strength in the turnover category. From a Wolverine perspective, that feels like a much better scenario than strength on weakness. The Wolverines are much more equipped to fend off Ohio’s pressure than hold their own against an offensive rebounding juggernaut.

Trey Burke played the worst game of his career against Ohio State and now will face an Ohio team coached by one of Thad Matta’s former assistants. For one of the first times this season, Burke struggled with turnovers in that semifinal loss to Ohio State and coughed the ball up eight times. Because Michigan runs so much ball screen offense, Burke’s turnovers and ability to control a game serve as a bellwether for Michigan’s success. The Wolverines are just 1-5 when Burke accumulates four or more turnovers this season and they’ve lost just one of 16 games when he gives the ball away two times or fewer. Ohio’s greatest defensive weakness is its tendency to collapse around penetration and the Wolverines will need their freshman guard to find his way into the paint and make things happen – scoring and distributing –  in his first NCAA tournament appearance.

D.J Cooper has accounted for 41% of Ohio’s made baskets this season either by scoring them himself or setting up his teammates. Michigan has probably only played two or three other games this season where the defensive game plan is more focused on one individual player. The game plan is to make Cooper attempt to beat you by scoring the ball himself, rather than picking apart the defense and creating for others. He’s a below average shooter – 39% on twos and 31% on threes – something that’s attributable to questionable shot selection. Similar to someone like Tim Hardaway Jr., in effect on the game rather than style of play, Cooper is more than capable of getting hot and taking over a game. Look for Michigan to start with Stu Douglass on Cooper but Trey Burke will get his chance, especially if Cooper routinely penetrates the Michigan defense.

We’ve scouted the rest of Ohio’s rotation in detail here but next on Michigan’s list of priorities will be stopping inside scoring threat Reggie Keely. Keely is a big body that can absorb contact and converts 53% of his twos. He also gets to the free throw line and is the best offensive rebounder on the Bobcat roster. The onus is on Jordan Morgan to keep Keely out of the paint and off the glass.

While it might lack the star-power, the most pivotal matchup of the night could very well be Zack Novak against Ivo Baltic. The mismatches between the two are drastic and whoever can get the best of the battle could have the upper hand. Either Novak spreading Ohio’s defense with his three point shot on the perimeter or Baltic using his size in and around the basket.

Ken Pomeroy projects a 66-61 Michigan victory with just a 30% shot of the 13-seeded Bobcats upsetting the Wolverines. If both teams play an above-average to good game, this is a game that Michigan wins comfortably. However, the margin of error is slim. It’s March and if Michigan gives Ohio the opportunity to hang around, the Bobcats are more than confident enough to play with the Wolverines to the final horn.

This & That. This will be Stu Douglass’ 136th game played, good for a Michigan career record. If Zack Novak plays over 25 minutes today he’ll set the Michigan career record for minutes played. The Ohio athletic department is reporting that they’ve sold more tickets for the Nashville pod than any other school.