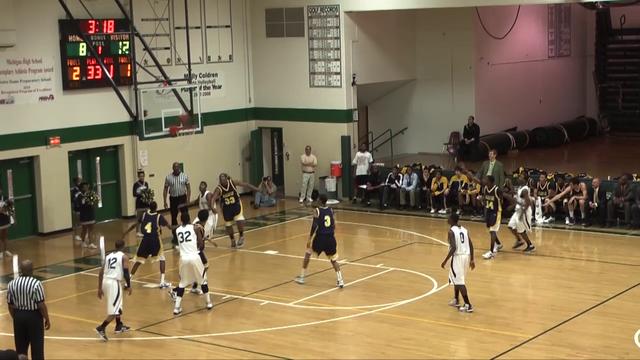 Michigan commit Derrick Walton and Harper Woods Chandler Park fell to Detroit Country Day, 89-52 in a regional final on Wednesday night at Pontiac Notre Dame Prep. Walton tallied 19 points, four assists, four rebounds and four steals in the loss. Chandler Park trailed by five at the end of the first quarter, but that was the closest they would get as the Yellowjackets pulled away in the second quarter and went into halftime with a 51-31 advantage. Country Day was just too strong inside and had too much depth for Chandler Park to handle. Watch our video of Walton in the embedded media player below:

It was a frustrating night for Walton, who scored nine of his 19 points from the charity stripe. Country Day ran a full-court press for nearly the whole game, double-teaming Walton in hopes of denying him the inbound pass and forcing somebody else to take the ball up the court. In the half court, the Yellowjackets continued to try to deny Walton, and defenders swarmed him each time he touched the ball. Although he was 0-for-6 from behind the arc – a week after he hit five triples in play off action – Walton still did find ways to get to the bucket and finish or draw the foul. When he was double or triple teamed, Walton often kicked it out to an open teammate, but the shots simply weren’t falling for the Eagles. Walton finished the game 5-for-11 from the field and 9-of-12 from the free throw line.

It certainly wasn’t Walton’s best performance of the season (just last weekend, Walton had 47 points and 12 rebounds in a 68-63 win over No. 3 Detroit Crockett), but he still showed plenty of flashes of why he will be successful when he arrives in Ann Arbor in 2013. Per usual, Walton was quicker than anybody on the floor, and in the open court, he was lethal and could finish on both sides of the bucket. He has a knack for finding the open lane and attacking it. Probably the biggest aspect of his game that Walton will have to work on over the offseason is his shot and his shot selection. He has solid form and when his shot is on, he can be deadly from behind the arc. But when it’s not on, as was the case Wednesday, he tends to force shots to try to get into a rhythm rather than letting the game come to him. The consistency with the jump shot isn’t there quite yet, but Walton’s quickness, vision and ability to get in the lane serve as a reminder why the junior point guard is so highly regarded.