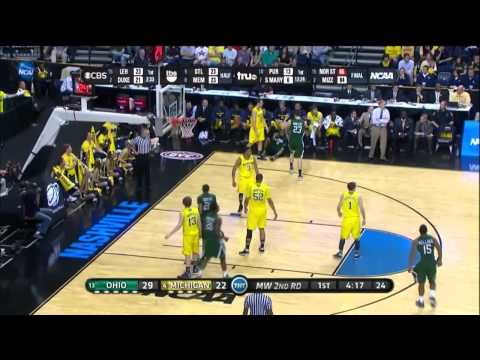 Although it felt like Ohio dominated for the majority of the first half on Friday, this was a tie ballgame over 11 minutes in. With 6:10 to go in the half, Michigan trailed by just two points. Ohio seemed to be controlling the pace of the game, but the Wolverines continued to hang around and most figured that it was just a matter of time until Michigan took over. Then, with 5:40 to go, Walter Offutt hit a tough jumper in the paint to give the Bobcats a four-point lead. From there, Ohio caught fire, going on an 11-0 run to turn a two-point lead into a 13-point lead with just over four minutes to go. Following Offutt’s bucket, Jordan Morgan turned the ball over and just seconds later, Nick Kellogg made him pay for it with a 3-pointer, forcing John Beilein to burn a timeout to try to stop the bleeding. Not long after, with the ball in the right corner, D.J Cooper rose up for a three and was fouled by Zack Novak. Cooper hit all three freebies to make it a 10-point game. After more offensive gaffes by Michigan, including a Tim Hardaway Jr. turnover, Nick Kellogg hit a deep ball to extend the lead to 13 with 2:49. Suddenly, Michigan could do nothing right offensively and couldn’t get any stops on the defensive end, and the Wolverines were in danger of losing control of this one before the halftime buzzer even sounded.

Michigan was in desperate need of a run heading into the break in order to gain some momentum back. Bridgestone Arena was beginning to feel like Ohio’s home court, with all fans other than Michigan fans rooting for the underdog. Finally, the Wolverines gave the Michigan fans in attendance a little something to cheer about, ending the half on a 7-0 run.  Like most runs do, this one started with defense. Burke reached in and ripped DJ Cooper before sprinting down the open court for a smooth two handed dunk. On Ohio’s following possession, Michigan forced another turnover, this time with disciplined post defense by Jordan Morgan forcing Reggie Keely to throw the ball out of bounds. On the other end, Hardaway lined up a three and buried it.  Following a missed layup by Morgan, Evan Smotrycz had two chances at a tip and finally willed the ball into the basket to cut the deficit to six. Michigan had a chance to trim the deficit even more with the final possession of the half but couldn’t further take advantage, as Burke was off the mark on a three and Morgan couldn’t convert the put back. Still, the Wolverines went in the locker room with something to feel good about on the heels of a 7-0 run.

With under nine minutes to go in the game, Trey Burke had been nearly non-existent offensively. He had just four points and was 2-for-8 from the field, including 0-for-3 from behind the arc. Still, Burke has been one of Michigan’s most consistent and clutch players this season, and it seemed as though it would just be a matter of time until Burke got it going. With Michigan down nine with 8:51 to go and once again in danger of allowing this one to get out of hand, Burke single-handedly brought the Wolverines back into the game, scoring 12straight Wolverine points. Burke’s scoring outburst was typical of what the freshman has shown all season. He attacked the rim while finishing or getting fouled and also knocked down a pair of three pointers. Burke had led Michigan back many times this season and with 4:12 to play and Michigan trailing by just three points.

With the exception of two free throws late, Michigan held Ohio scoreless for the final 4:12 of the game. Given the fact that the Wolverines were down three at the start of that time span, most would assume that Michigan came away with the win. All the Wolverines needed would be a three or a couple field goals in the final four minutes to tie it or take the lead. But while the Michigan was stellar defensively down the stretch, offensively, they couldn’t get anything to drop. Whatever the cause, it was painful to watch.

Out of a timeout, Burke finds Evan Smotrycz, who had 15 points and seven rebounds, rolling to the basket for what appears to be an easy opportunity. Smotrycz’s layup attempt was blocked and came up short. Burke missed a three from his favorite spot on the floor, the top of the key. Then Burke drove and kicked to Novak in his favorite spot on the floor, the corner in front of Michigan’s bench, he missed. Burke forces a turnover and gets Michigan the ball back but the Wolverine offense stagnated and Burke was left to fire up another isolation three from the top of the key. He does a tremendous job of creating space for the step back but, once again, he missed his favorite shot on the floor.

5. Smotrycz’s turnover with 7 seconds to go ends it

Michigan had a seemingly endless number of opportunities and here are a few more. Michigan’s first option on offense is Stu Douglass popping out at the top of the key but Ohio defends it perfectly. That forces Michigan to reset the offense and burn precious seconds before Burke fires up another three from the top of the key. The result was no better but Michigan was awarded the ball out of bounds on the rebound. Another opportunity. Michigan went with its base offense of sort and that resulted with Evan Smotrycz getting the ball on the wing. He put the ball on the floor a couple times and simply lost control of the handle as the ball bounced out of bounds. Michigan was forced to foul Walter Offutt who hit the two free throws necessary to put the game, and Michigan’s season, to bed.