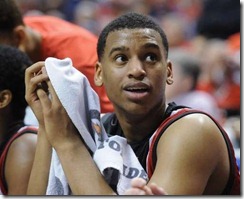 Monte Morris back on the radar?

With Michigan’s scholarship availability shifting significantly in the last week, Monte Morris has been mentioned as a target back on the Michigan radar. Rod Beard, of the Detroit News, reports that Morris’ prep coach states that Michigan has resumed recruiting the junior guard.

“It seemed like Morris always came up with that key basket,” Haske said after Beecher’s 74-60 title game victory. “Great team, great player, they’re the best team in the state.”

Morris is so smooth that he’s more athletic than a defender may suspect, and has mastered the pull-up mid-range shot that a Division I guard has to have. He had 18 points, seven rebounds and six assists to one turnover as Beecher closed out its undefeated season, after 18 points, seven rebounds and seven assists in the semifinal win over defending state champion Schoolcraft.

The wiry guard has a great feel more the game and seems to always make the smart play. Morris was named Michigan’s Class C player of the year.

Drake Harris is going to be a hot name this summer and he’s on the radar of high major basketball and football programs across the country. Indiana and Michigan State have offered while Michigan, Ohio State, Georgetown and Illinois are all hot in pursuit. In football, he has drawn offers from Florida, Notre Dame, Michigan State and Michigan. Harris and Grand Rapids Christian were knocked off in the state quarterfinals but here are some highlights of Harris this season:

Trevon Bluieitt is another 2014 prospect that will be a hot name in the coming months. The Indiana junior already owns a pair of state titles and a handful of high major offers to go along.

Michigan assistant coach Jeff Meyer recently watched Bluiett and his Park Tudor squad work out before the state championship game. In the state title, Bluiett had 25 points and eight rebounds in Park Tudor’s state title win and now has totaled 46 points, 16 rebounds, four blocked shots and has shot 19-of-28 from the field in two state title games.

Here’s scouting footage of Bluiett from this season: