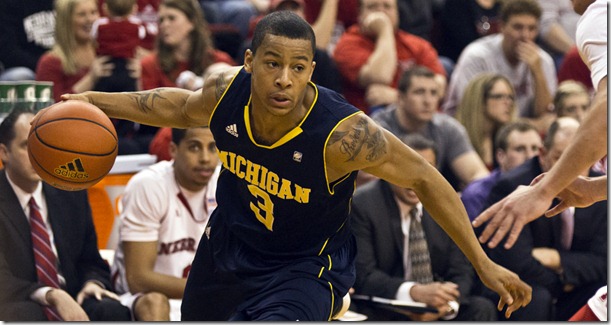 Michigan’s season ended less than a month ago but the last three weeks have been nothing short of a whirlwind. First it was Evan Smotrycz, Carlton Brundidge and Colton Christian transferring out of the program. Then Trey Burke exploring his draft status followed by endless rumors that he was in the draft, out of the draft and everything in between. On Monday afternoon, the issue was put to rest as Burke announced his return. Michigan could still add a fifth year transfer or another recruit late in the game, but it’s finally safe to start peeking ahead to next season and examining the 2012-13 Wolverines with Trey Burke.

There’s little debate that point guard is one of, if not the, most important positions on the floor. Michigan’s last two seasons have taught us just that as Darius Morris and Trey Burke carried the Wolverine offense to its most efficient seasons in the last decade. Trey Burke is the most important player on the 2012-13 Michigan roster and that’s not up for debate. This isn’t just the case of replacing a great point guard with an average point guard, the Wolverines didn’t have another scholarship point guard.

Mitch McGary might have been a statement recruit when he committed last November but keeping Trey Burke for his sophomore season is a significantly more important feat.

Without Burke, Michigan was an NCAA tournament bubble team at best projected somewhere in the middle of the conference. With Burke, the Wolverines are a consensus top ten team in the preseason and should expect to compete for a second consecutive Big Ten Championship. I had trouble justifying Michigan’s preseason ranking a year ago. This year, Michigan’s on paper talent level backs up its ranking with ease.

It remains to be seen how those minutes are best distributed at the two, three, four and five positions but there’s no question who will be playing 35 minutes per game at the point. That constant at the point guard is a precious reassurance that Michigan’s incoming, and returning, talent won’t go to waste and that the Wolverines are in steady hands.

Next season is going to be fun. This is easily the most talented roster that John Beilein has ever had and now that Burke is back, the Wolverines have their floor general. Sure there are questions. Michigan lacks proven depth at the off guard position, lost a pair of senior captains and will be relying on a number of players that have never played a college game. How high this team’s ceiling truly is remains to be seen – and will certainly be debated throughout the coming months – but Burke’s return means that the excitement is warranted.

On an individual level, this was the right decision for Burke and there’s no faulting his process. A little over a year ago he was named Mr. Basketball in the state of Ohio. A few weeks later I remember chatting with him and his dad in Akron about whether Darius Morris would return to Ann Arbor. He made it clear he hoped he would be back, giving him a year to play with Morris. The whirlwind over the next 12 months felt unprecedented. Morris would enter the draft and Burke would go from fringe top 100 player to co-Big Ten Freshman of the Year and a Freshman All-American.

I remember Burke rattling off a list of goals in one of his workout videos last summer. He talked about gaudy scoring and assist averages, all-conference accolades and winning championships. His game and personality are defined by an understated yet brash confidence but I don’t think anyone, even Trey, imagined a freshman year so successful on an individual (Freshman of the Year, Second Team All-American) and team (Big Ten Champions) level.

Burke, like every young basketball player, has an end goal in sight: the NBA. That’s not to be read as a knock, to doubt his love for Michigan, or anything else. It’s a simple fact of the matter. Suddenly, he thought he had the opportunity to achieve his dream and he looked long and hard at the opportunity. It’s tough to fault a kid for chasing his dream. At the end of the day, he took in all of the data from his parents, coaches and mentors and made what seems like the right choice. A fact that will be judged in the years to come. For now, draft gurus feel that Burke has a very real chance to emerge as a first round pick:

ESPN’s @chadfordinsider: A dearth of true point guards (in college) next season, so look for Burke to be a potential ’13 first-round pick.

On Scholarships and Spike Albrecht’s Commitment…

Trey Burke said that he decided he was returning to Ann Arbor last Wednesday. John Beilein reiterated that Burke communicated with him every day throughout the process. Spike Albrecht began his official visit on Thursday and committed Friday night. Connecting between the dots, Beilein and his staff took Albrecht as a back-up point guard more than a desperate replacement for Trey Burke.

That move makes sense. Only John Shurna and Tim Frazier played more minutes in Big Ten games than Trey Burke last season and his primary back up, Stu Douglass, graduated. Albrecht’s name began buzzing on the internet in the last week or two but Michigan coaches have been watching him for nearly a month. He’s a solid fit because of his connections to the incoming class and the fact that he shouldn’t affect Michigan’s presumed point guard of the future, Derrick Walton.

If there’s anything that the last month has taught us, it’s that college basketball coaches simply have to keep recruiting. John Beilein mentioned that 40% of high major players transfer or declare for the NBA draft by the end of their sophomore season. That staggering statistic is the reason why it makes sense for Michigan to continue recruiting Amedeo Della Valle and why the Wolverines will continue to pursue prospects in the class of 2013. Things happen. Some situations work out too well and the lure of the NBA prevails. Other situations don’t work out and other opportunities prevail.

Late commitments are nothing new for Michigan. The Wolverines added Jon Horford and Colton Christian two seasons ago along with Max Bielfeldt last season. Not once have they prohibited the Wolverines from adding or recruiting prospects.