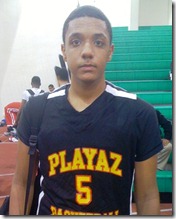 Michigan has been keeping a close eye on combo forward Reggie Cameron, a 2013 prospect from Hudson Catholic (NJ). Cameron has already impressed scouts, including ESPN’s Dave Telep, this spring at the New Jersey Spring Fling and appears poised for a strong AAU season. Cameron has been hearing from Michigan since the middle of his high school season and has been discussing the possibility of both a visit and potential scholarship offer with Michigan head coach John Beilein. UM Hoops caught up with Cameron on Sunday night to discuss his game, recruitment, Michigan and more.

On his game: ”My strength is definitely my jump shot. I pretty much can shoot it from anywhere on the court. I like to think of myself as a guy with a high IQ because I’m not crazy athletic and have to use my length – being almost 6-foot-8 – I just have to outsmart people.”

On his high school season: “It went well. We finished 25-3. We lost to the eventual state champion in St. Anthony’s, they went undefeated, it was definitely a good season. Our whole starting five is coming back so we should be the favorites next year.”

On whether Michigan has watched him play: “Yes, they came to a couple of my practices during the season.”

On who he talks to at Michigan: “I’ve talked to John Beilein the most. He wants me to get on campus and check it out and he’s telling me how Michigan isn’t just a great basketball school – the academics are second to none – and he thinks that I’ll like it and be a perfect fit there.”

On a potential visit: “I’m definitely considering visiting Michigan and probably will.”

On what he knows about Michigan and their offense: “I know a lot about Michigan. They spread the floor a lot and their shooters get a lot of open shots. They play smart and they play together, obviously they are well coached so all of that put together equals wins. ”

On whether school stands out: “I’m still wide open. My high school season just ended and I haven’t put a lot of thought into it yet.”

On what he’s looking for in a school: “Just a place where I think that I’ll feel comfortable. A place that can improve me individually as a player and where I can win.”