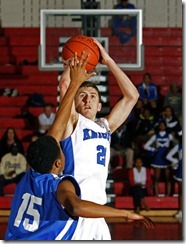 Michigan coaches took to the road this week as NCAA evaluation restrictions were lifted across the country. Wolverine head coach John Beilein traveled to New Jersey where he stopped in on a pair of 2013 targets. Beilein watched combo forward Reggie Cameron, a perfect fit for the four position in Michigan’s offense that we interviewed earlier this week, and he also stopped by on consensus 2013 top 100 combo guard Jaren Sina.

We first profiled Sina, an Alabama decommit, in October but the 6-foot-2 guard reported this evening that Michigan’s interest has piqued in recent weeks.

“Now that they’ve had transfers I know that some scholarships have opened, so I’ve been excited about that. I hope that we continue to build a relationship and [Beilein] can watch me more on the AAU circuit.”

Sina, who is rated as a top 100 prospect by all three major scouting services, felt that he played well in front of the Michigan head coach this afternoon and was excited to hear more from the Wolverines.

“My shot was good today, I was hitting a lot of shots and attacking the hoop. It was good for Coach Beilein to get to see me play. I knew he was going to be there, so I was really excited about that.”

Sina still touts a lengthy list of suitors and has yet to narrow down his choices, rattling off Pittsburgh, Alabama, Penn State, Northwestern, Villanova, Virginia Tech and a “long list of other Big East and ACC schools” when prompted for a list.

Emphasizing his interest in Michigan, the combo guard was cautious to see how his recruitment developed with the Wolverines. Unable to talk with Beilein after his workout due to NCAA rules, Sina was excited to hear what the Michigan head coach thought of his performance in the coming days.

“As we continue to build a relationship, I think definitely I would love to take a visit out there. Right now I don’t know how strong the interest is and that’s why I definitely want to talk to Coach Beilein [now that he] can get to know about my game. But I really like Michigan and I definitely would like to get out there for a visit too.”

Sina will play with Team Final, a Pennsylvania based AAU team, this summer on the Nike EYBL circuit beginning with an event this weekend in Minnesota. Sina won’t rush the process, noting that he would be “willing to commit at any time” but will wait until he’s ready and feels the most comfortable with a specific school.