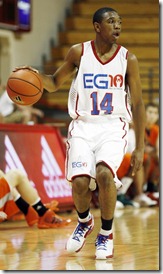 From its graduating seniors, incoming freshman to future commitments, Michigan has prioritized its recruiting efforts in the state of Indiana. 2012 commitment Glenn Robinson III is the highest ranked 2012 Hoosier state prospect by Rivals.com and, when all is said and done, 2013 commitment Zak Irvin could be the highest rated Indiana player in his class as well. Five of Michigan’s last eight commitments are Indiana natives while two others played their AAU basketball for a team with Indiana connections. Michigan has made its presence felt and has continued to extend that effort to future classes, including 2014, 2015 and even 2016.

2014 prospects Trevon Bluiett, Sean Sellers, Aaron Brennan, Perry Poindexter and Bryant McIntosh have all listed Michigan prominently in the past year and at least a handful of those products should earn a Michigan offer this summer. This weekend in Indianapolis, the focus was on the future where a number of 2015 and even 2016 prospects stole the show at the IndyBall.com Shootout.

Chandler White (2015), a 6-foot-2 combo guard from Fort Wayne Carroll, was one of the more impressive prospects at the Indyball.com Shootout. White is hearing from Michigan, Michigan State, Indiana, Purdue, Xavier and Butler and has already taken visits to Indiana, Purdue, Michigan and Michigan State. White reported that “Indiana and Michigan are both really up there” when asked whether any schools stood out at this time.  He also reflected on his visits to date:

“Indiana, I really like because of their atmosphere and fans. Purdue, I like them a lot because of the way they play. Michigan I went to for a basketball game, and I liked that.”

Michigan doesn’t offer prospects until June 15th of their sophomore seasons, so you won’t see offers extended to any 2015 prospects for over a year. However, recent recruiting cycles have proven just how valuable early evaluation can be in a state like Indiana – where early recruiting is generally taken to another level. Michigan’s first 2012 commitment was from Glenn Robinson III in September of 2010. At the time Robinson was relatively unheralded but his stock has risen consistently to the point where some sites have him ranked as the best player from the state.

Michigan prioritized its 2013 targets and had four commitments wrapped up before September of last summer – two from the state of Indiana – and the focus on the Hoosier State is unlikely to slow down anytime soon. Michigan’s list of young targets in the state of Indiana will continue to expand throughout the summer and these are just an early group of names to commit to memory.

Joe Eberhardt contributed to this report.