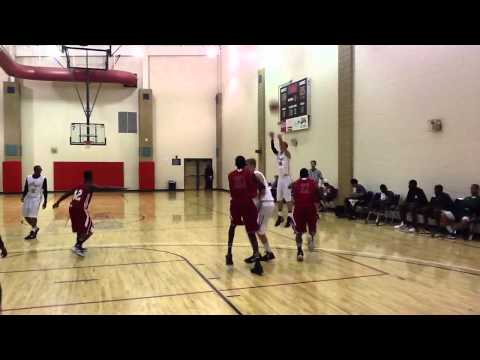 With an updated NCAA calendar, spring evaluation is back. College coaches took to the road and cramped into AAU gyms across the country. John Beilein and his assistant coaches are no exception and have taken to the road to watch their 2013 commitments as well as catch a number of younger targets.

Here are some early notes from the AAU circuit’s Friday night action and make sure to stay tuned throughout the coming days as we bring you the latest with first hand coverage from Merrillville as well as news and notes from around the country.

Lavall Jordan is on the ground in Merrillville today while Bacari Alexander has been stationed in Minneapolis for the Nike EYBL event. Devin Booker, one of Michigan’s top 2014 prospects, had a big game on Friday night in EYBL action although his Alabama Challenge squad lost to the Family. Booker poured in 17 points on 6-of-11 (3-5 3pt) shooting with five assists and no turnovers in just 20 minutes of action. Jaren Sina, who we interviewed earlier this week, had nine points on 3-of-8 shooting in a 20 point loss to CIA Bounce.

Reggie Cameron, the fastest rising target on Michigan’s 2013 board, will begin action today.

2014 big man target Sean O’Mara is also in action at another tournament in Minnesota. His IBA Select team cruised to an easy victory by almost 50 points and he added 13.

As you would expect, Bacari Alexander has taken to an array of intriguing tweets while catching action on the sidelines:

It could just be me, but there is a different feel to recruiting after winning the B1G Championship. #justsayin

The moment always arises when a kid that committed to you plays well and everyone stares at you like damn. #epicinrecruiting

I was evaluating in slacks and a pair of loafers. One of the coaches passed and asked, “Why are you dresses up?” I said, “This is Michigan”

Derrick Walton led the Michigan Mustangs to Vegas for the Adidas Exclusive Run and was impressive on Friday night. Walton caught the eye of both Rivals.com and ESPN’s Dave Telep:

Michigan will have fine transition from Burke to Derrick Walton. Kid can play. Impressive. No BS in his game.

Michigan has itself another nice point guard on the way in Derrick Walton. The four star point guard runs his team and has a burst off the dribble that allows him to get into the lane and make plays with regularity. He’s also a communicator, plays hard and will ultimately be a very good replacement/complement to Trey Burke.

Luke Kennard is one of the top prospects on Michigan’s 2015 recruiting board and he’s already off to a strong start this spring. We posted some footage of Kennard earlier this spring and Beilein has been paying close attention to the freshman star.

Kennard led his King James team to a Friday night win at the King James Southern Exposure event with 18 points, seven rebounds and five assists. Here’s some highlights of the game with Kennard wearing No. 10 in white:

One final tidbit, it’s also worth noting that Michigan coaches were reportedly in Florida watching a pair of IMG prep school recruits, Michigan native Chris Fowler and big man Mango Mathiang, workout earlier this week. The level of interest remains to be seen but it’s another option to watch on the recruiting radar. Here are some couting reports of the post grads from earlier this spring:

Chris Fowler – 6’1 Post-Grad PG – IMG Post Grad: A native of Detroit, Fowler is a smart and strong point guard that runs a team and does what it takes to win. He sees the court well, gets teammates easy baskets and has the ability to create his own shot if necessary. Defensively Fowler plays the ball tough and is quick to jump the passing lanes for steals.

Mango Mathiang – 6’10 Post-Grad C – IMG Post Grad: A native of Australia, Mango is thin but long and athletic. He gets up and down the court very well and loves to finish off lobs. In the half-court his lack of heft keeps him from maintaining post position but he doesn’t shy away from the contact. At the defensive end he is a shot changer and shot blocker.