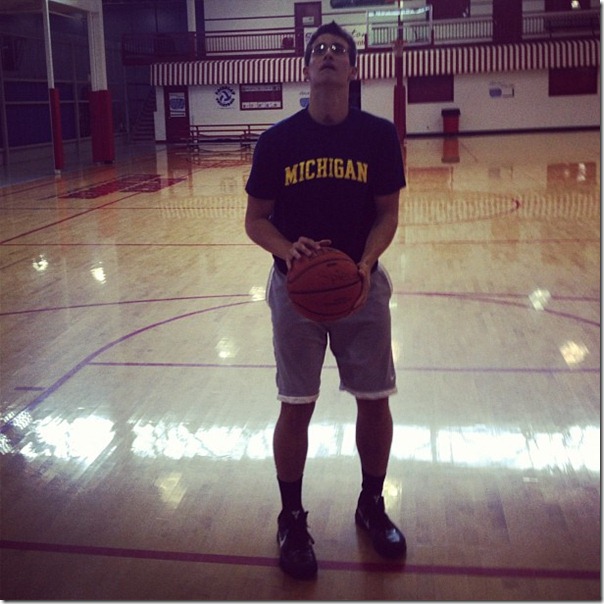 The Michigan Mustangs have been cruising behind the strong play of point guard duo Derrick Walton and Monte Morris at the Adidas VIP Exclusive Run. The Mustangs went undefeated in Vegas pool play and advanced to semifinals before being knocked off by Garner Road in the semifinals of the exclusive Adidas event. Walton, a 2013 Michigan commit, had a pair of 25 point performances on Saturday has impressed scouts throughout the event.

Michigan has got themselves a good one in Mark Donnal. The 6-foot-9 big man is a smart and productive player who has a serious competitive streak in him. His footwork is outstanding and he’s a good athlete who can finish through contact.

That praise was echoed by national scouts of rival networks including Scout.com’s Evan Daniels:

John Beilein stopped by Nike EYBL action in Minnesota and has been watching a number of Michigan targets including Reggie Cameron, Devin Booker, Jaren Sina among others.

It’s been a disappointing weekend for Devin Booker’s Alabama Challenge squad but Booker has been impressive, scoring 17 points thanks to five-of-seven three point shooting on Sunday morning. Cameron had a 15 point performance in a win over Baltimore Elite on Saturday afternoon where he knocked down four-of-four triples.

Back in Northwest Indiana, there were 2014 prospects stealing the show. Two notable Michigan targets with big performances were Peyton Allen and Cliff Alexander.

Peyton Allen is a deadly shooter who’s range already earned him an additional scholarship offer this weekend, this one from Iowa. Allen has already had multiple games scoring over 20 points in the tournament and led the Jets to a perfect record in pool play.

Cliff Alexander stole headlines late on Saturday night by damaging the equipment at the Merrillville Fieldhouse. Alexander took the ball on a breakaway and dunked the ball so hard that he tore the basket off of the backboard. Ball is Life has the footage:

Austin Hatch in the gym

Austin Hatch hasn’t played organized basketball since the tragic plane crash that killed his family last June. He has however been slowly working toward that goal, most recently getting some shots up with Indiana commitment James Blackmon at the Spiece Fieldhouse. Blackmon tweeted “Just shooting with my brother Austin Hatch, hardest worker I know!” and posted this photograph:

In more somber news, the final investigative report from that June crash was released by the National Transportation Safety Board. The Fort Wayne Journal Gazette has all of the details but here’s a summary:

The crash that killed Dr. Stephen Hatch and his wife and seriously injured his son was the result of a stall due to inadequate airspeed, according to the final report from the National Transportation Safety Board.

Hatch, 46, was flying his single-engine Beechcraft Bonanza, approaching Charlevoix (Mich.) Municipal Airport on June 24 after diverting from two other nearby airports.

Investigators did not find any evidence of mechanical failure or malfunction leading up to the crash, the report said. The NTSB report also said Hatch failed to follow proper protocol after his first attempt at a landing, which contributed to the accident, according to a final report released Friday.

Stay tuned to UMHoops.com for more on Michigan’s recruiting targets and commitments in the hours and days to come.