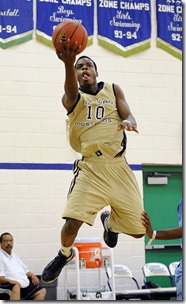 Michigan might not be done with its 2012 recruiting class just yet. As first reported by Sam Webb, Michigan is showing interest in 2012 Ohio decommit Caris LeVert. LeVert is a 6-foot-5 guard from Pickerington Central that originally signed to Ohio in November but has been released from his letter of intent after former Ohio coach John Groce took the Illinois job.

LeVert led Pickerington Central to the Division I State Championship as a senior and was named second team All-State after averaging over 18 points per game. Purdue, Iowa and Dayton have also expressed interest at this juncture.

Pure shooter and scorer with deep range and a quick release Caris uses his long frame to get shots off over defenders. Slashing scorer as well that can use the bounce to create shots for himself Levert is capable of having huge scoring games. Is still in the development stages with his body as he is on the thin side but has the athleticism and the length to make up for that at the time being.

More on LeVert in the hours and days to come, more notes from the AAU circuit after the jump.

UMHoops was on-hand for the Merrillville Spring Showdown and we covered the Nike EYBL in depth by the numbers, but those weren’t the only two venues with significant talent on hand. Michigan commitments Derrick Walton and Mark Donnal were in action at the Adidas VIP Exclusive Run while a number of other targets were playing everywhere from Pittsburgh to Grand Rapids to Augusta.

Derrick Walton led the Michigan Mustangs to a fourth place finish in the event. We covered Walton’s strong play on Friday night but the future Wolverine point guard was steady throughout the weekend – reassuring scouts, fans and coaches that Michigan’s point guard play will be in strong hands after Trey Burke. Mark Donnal’s impressive play was also covered on Sunday. We look forward to seeing both prospects in person back in the Midwest next week at the adidas Spring Classic next weekend in Indianapolis.

Bacari Alexander made the trip down South on Sunday to watch 2015 star Luke Kennard in the King James Southern Exposure 16U Gold Championship. The only coach to join Bacari Alexander in the crowd was West Virginia head coach Bob Huggins. Kennard’s King James squad eeked out a 2-point victory and Kennard

Here’s some footage (in addition to what we posted on Saturday) of Kennard in action:

Almost 1000 miles away from Luke Kennard’s game, another King James 16U squad led by a southern Ohio star was winning another championship. In Grand Rapids it was Vincent Edwards, a 2014 prospect from Middletown, OH starring for King James. Edwards was named the MVP of the Storm Classic for the second consecutive year as his King James squad defended its crown.

John Beilein was in to watch Edwards workout last week at an open gym at his school so it’s clear that the Wolverine interest is strong in the 2014 star.

Sean O’Mara, one of the 2014 big men on the Michigan radar that could be eyeing a June offer, also played well in Minnesota with IBA Select at the Best Buy Spring Classic.

A year ago it was Mitch McGary and Glenn Robinson III that dominated that the PIttsburgh Jam Fest before rapidly rising up the recruiting charts. There weren’t nearly as many Michigan targets in attendance at this year’s tournament but one 2014 star with Michigan on his list stood out: Marqywell Jackson.

Jackson listed Michigan, Michigan St, Xavier, USC, and DePaul and the combo guard impressed with his length and scoring ability. The Detroit Crockett guard lit up twitter throughout the tournament with his strong play. The word from some in attendance was that Jackson has great size, shoots it well and should grow into a great player due to his competitiveness.